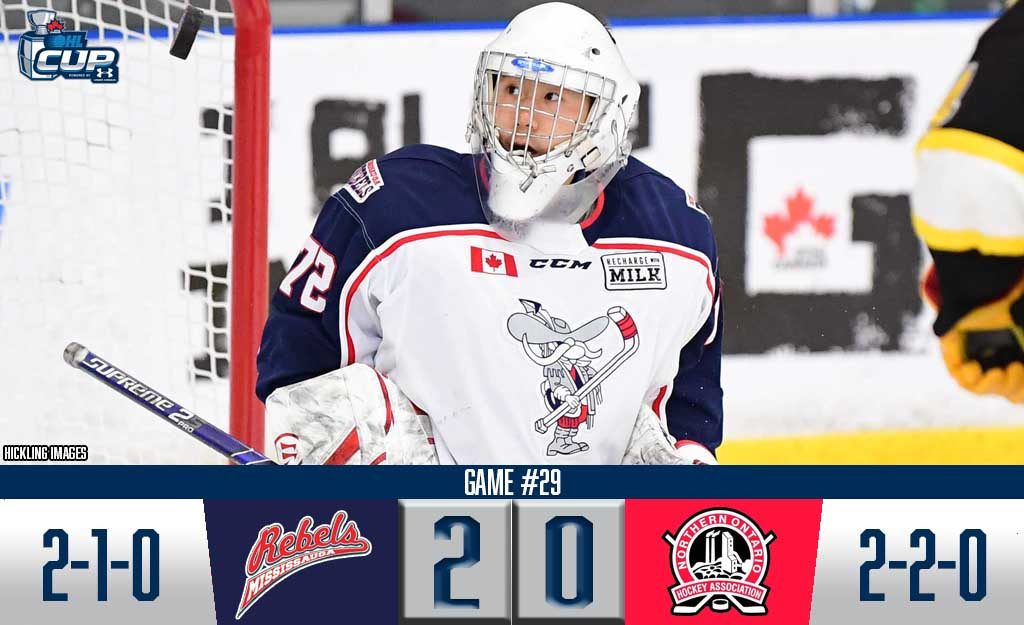 Justin Wu stopped all 25 shots he faced, keeping Team NOHA off the board as the Mississauga Rebels set themselves up for a Friday afternoon showdown with the Whitby Wildcats.

Wu was particularly strong in the third as the Rebels were outshot 12-7 by a determined NOHA group but the undersized but extremely agile netminder answered the call.

Jesse Fishman (3) put Mississauga on the board with 3:39 left in the opening frame. Pasquale Zito (2) would give them some insurance 1:43 into the third period. Max Donohoe gathered assists on both goals.

Team NOHA’s Benjamin Gaudreau was solid in a losing cause, turning aside 30 shots including a second period penalty shot attempt by Mississauga’s Zito to earn Player of the Game honours for his team.

Team NOHA wraps up its round robin schedule at 2-2 in a division with three other teams currently owning 2-1 records. Should their showcase be over, they were led in scoring by Devon Savignac (2-2–4) and Mitchell Martin (1-3–4) while Gaudreau posted a 2.03 goals-against average and .936 save percentage over three games.

The Rebels will face 2-1 Whitby at 1:45pm in a game that could well decide which of the two teams will advance to Saturday’s quarter-final.