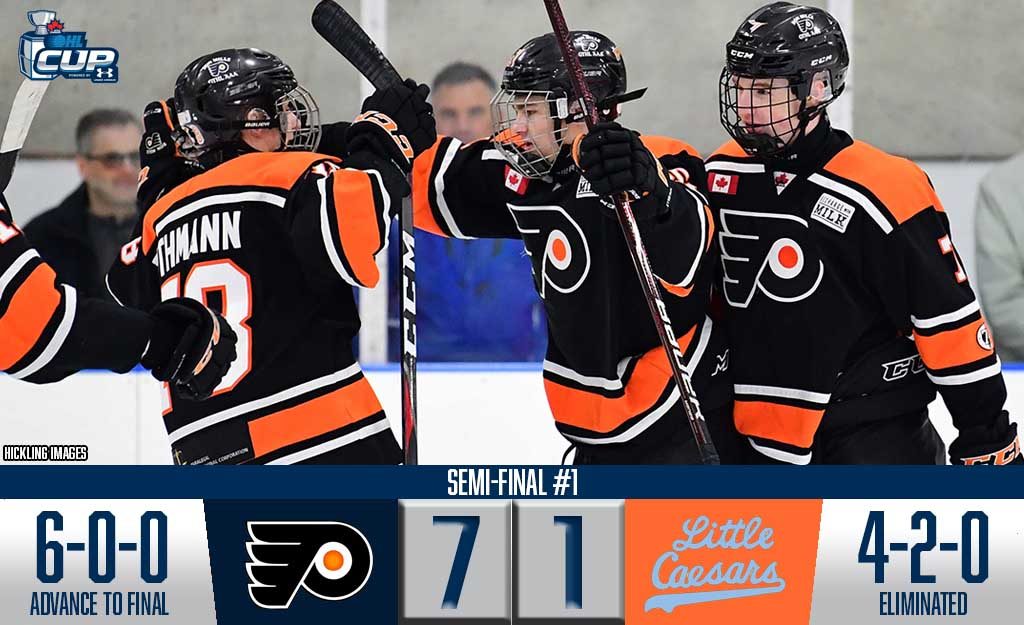 Exceptional status OHL Priority Selection prospect Shane Wright (5, 6, 7) gave fans a taste of what they can expect down the road, netting a hat-trick as the Don Mills Flyers punched their ticket to the OHL Cup Powered by Under Armour Championship Final.

Don Mills overwhelmed the Detroit Little Caesars 7-1 as Wright was dialled in, joining teammate Brandt Clarke (2) with three points as the Flyers improved to 6-0.

“I felt like right off the first shift my legs were going and my brain was there as well,” Wright said of his performance. “I got a couple lucky bounces too that you need sometimes but I felt like I was playing well tonight.”

Wright climbed into the showcase scoring lead with a total of 15 points (7-8–15) over six games while other Don Mills goals came from Alex Christopoulos (4, 5), Francesco Arcuri (4) and Clarke (2).

“I thought we were really responsible defensively,” said Flyers head coach Marc Slawson. “We played on the right side of the puck and I thought the boys were really disciplined with that approach. We were really good in terms of managing the game and we really showed our determination to win, coming away with a lot of the fifty-fifty puck battles.”

Detroit’s Billy Renfrew (2) ended Don Mills’ streak of shutout hockey at 158 minutes and 35 seconds, providing the Little Caesars with their lone goal as their showcase came to an end.

Detroit wrapped things up as the first American team to reach the OHL Cup Powered by Under Armour semi-final since 2013, playing to 4-2 record. They were led offensively by captain Griffin Jurecki (4-6–10) while Saturday’s Player of the Game Jack O’Brien (2-6–8) trailed close behind. Zak Brice played all six of Detroit’s games, finishing with a 2.34 goals-against average, an .893 save percentage and two shutouts.

The Flyers prepare for Monday’s OHL Cup Powered by Under Armour Championship Final set to take place at the Mattamy Athletic Centre, formerly known as Maple Leaf Gardens. The game can be seen live on Sportsnet Ontario when the puck drops at 7:00pm.