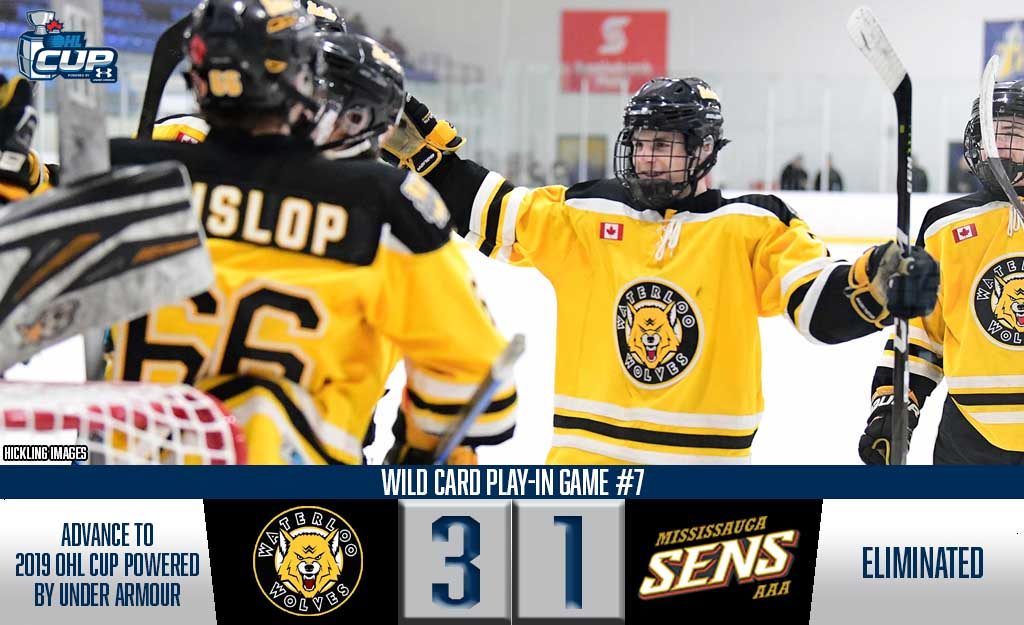 The Waterloo Wolves took the long way, but perservered through it to defeat the Mississauga Senators 3-1 first thing Wednesday morning, punching their ticket to the 2019 OHL Cup Powered by Under Armour.

After a 2-0 loss to the Mississauga Rebels on Tuesday morning, the Wolves rebounded with back-to-back wins, first defeating the Guelph Gryphons 5-2 on Tuesday night before defeating the Sens to finalize the 20-team field.

Lucas Gaiger opened the scoring for Waterloo before Mississauga’s Braeden Kressler scored his fourth of wild card play to draw things even before the first expired.

McDonald would add an empty netter to seal the deal as the Wolves got a few big saves from goaltender Marshall Nicholls en route to the 3-1 win.

Waterloo returns to the OHL Cup Powered by Under Armour after missing out on the showcase last year. They’ll face the London Jr. Knights, a team they recently defeated in a two-game ALLIANCE Wild Card Series last week.

The Mississauga Senators head home with a 1-2 record in wild card play. Braeden Kressler led the team with five points (4-1–5) over three contests.

The Waterloo Wolves will compete in the Shanahan Division alongside the London Jr. Knights, Quinte Red Devils, Thunder Bay Kings and Toronto Marlboros.