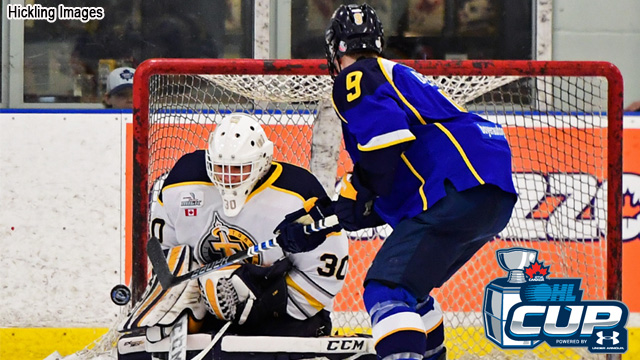 The Whitby Wildcats are the first team to clinch a spot in Saturday’s quarterfinal round as Cole Perfetti had two goals and an assist in a 3-1 win over the wild card entry Toronto Titans.

“We weren’t ready for the opening 10 minutes, but we came back strong,” said Pearson, a former OHL forward who was a first round pick of the Toronto Maple Leafs in 1989. “We’ve struggled to put together a full 45 minutes, so we’re still seeking more consistency in our game, but overall we’re happy that we’ve achieved our goal of getting into the quarterfinals and competing for a championship.”

Perfetti, a player not eligible for the OHL Priority Selection until 2018, scored a pair of second period goals under four minutes apart to put the Wildcats in the lead before assisting on an insurance goal by Brett Benham just 30 seconds later.

“Cole Perfetti is one of the smartest young players I’ve seen and I say that as someone who has coached minor hockey for some time,” Pearson noted. “His hockey IQ is what makes him so special and he has been a real big part of our team this year.”

Luke Pearson got the win in goal for Whitby as the Wildcats wrap up the preliminary round with a record of 2-0-2.

Alex Dominique provided the lone goal for the Titans who fall to 1-2-0 and have been eliminated from quarterfinal contention.