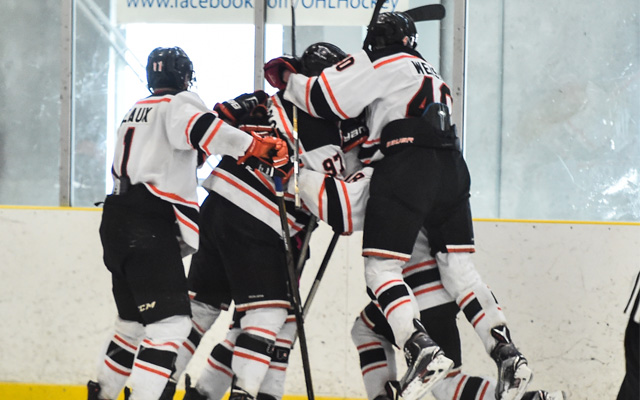 Tyler Weiss continues to turn heads at the 2016 OHL Cup, doing so once again on Saturday as his goal 7:36 into the second overtime lifted the Don Mills Flyers to a 4-3 win over the Toronto Red Wings.

The back-and-forth affair came to an end when the Raleigh, North Carolina native came down the left wing, faking a shot to create a lane to the net before lifting a quick release over the shoulder of Jack Watson in the game’s 62nd minute.

The Flyers and Red Wings swapped chances throughout the 4-on-4 overtime session, but the last shot was all that mattered as the Wild Card entry Don Mills Flyers will advance to play in the Semi-Finals on Saturday evening.

The double-overtime winner stands as one of the biggest goals of Weiss’ young career.

“That’s right up there with the empty netter at the Youth Olympics,” said Weiss, who won gold with the United States in Norway earlier this season. “I saw the goalie drop his shoulder and I was out of gas so I just fired it and hit my spot.”

After finishing outside of the GTHL’s top four, the Flyers gained entry to the OHL Cup with a double overtime Wild Card Play-In victory over the Kitchener Jr. Rangers, proceeding to go 3-1 through Round Robin play with a Quarter-Final clinching 4-2 win over the Mississauga Rebels on Friday.

“We wanted to come in here and show people what we can do and that we belong here, so a win like this is big for us,” Weiss added. “We battled the Red Wings in some good games throughout the year and they gave us a good fight today.”

The Red Wings led 3-2 with four minutes remaining before Jacob Gravelle tied the score with 1:34 left in the third period.

Weiss’ overtime winner came on an assist from Jack Babbage, the reverse sequence of the Flyers’ double OT winner against Kitchener in the Wild Card Play-In game.

The Toronto Red Wings had goals from Barrett Hayton, Matthew Hayami and Adam Trotman in the loss. They close out their 2016 OHL Cup with a record of 2-3-0, reaching the Quarter-Finals for the first time since 2008.

The Flyers advance to the OHL Cup Semi-Finals for a second straight year.