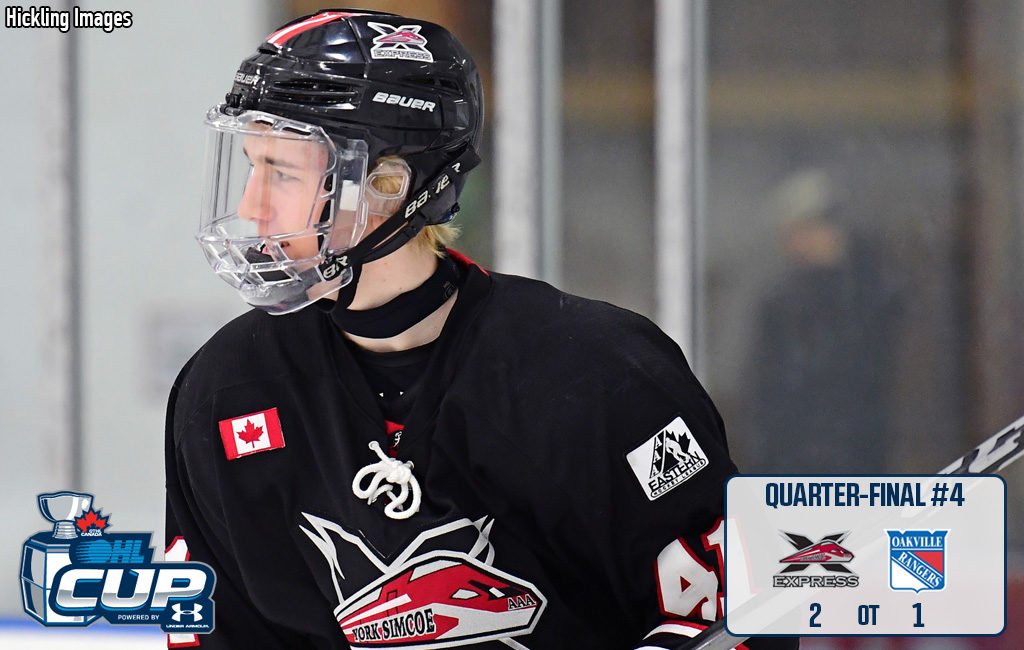 The York-Simcoe Express are into the final four at the 2018 OHL Cup powered by Under Armour after Evan Vierling (5) stepped over the blue line with 1:46 remaining in overtime to send a quick release past Oakville Rangers netminder Davis Tolnai and win it for York-Simcoe.

The 2-1 thriller came before a packed house at the Scotiabank Pond as the two evenly-matched opponents engaged to a fast-paced, free-flowing contest that went right down to the wire.

Vierling’s winner was accompanied by an assist on Cameron Butler’s (5) first period marker as the OMHA champion Express are one step closer to an OHL Cup title.

“It’s exhilarating, that’s all I can really say,” said Vierling after being mobbed by teammates. “Everything is so tight in that situation and I just wanted to get the puck to the net. Fortunately it found a way in.”

York-Simcoe netminder Alexander Imperio made 24 saves to improve to 3-0-0 in the event with a 1.63 goals-against average and a .950 save percentage.

The win comes a few weeks after York-Simcoe defeated Oakville 3-2 at the 2018 OMHA Championships in Aurora, Ont as the Rangers settled for bronze in the tournament.

The Rangers, who were undefeated throughout the SCTA’s regular season, wrap up their OHL Cup run with a 2-2-1 record as blueliner Zack Terry (2-3–5) and forward Luke Evangelista (1-4–5) led the team offensively. Adam Cherepacha led Oakville with three goals.