Vaughan battles back to tie Whitby in opener 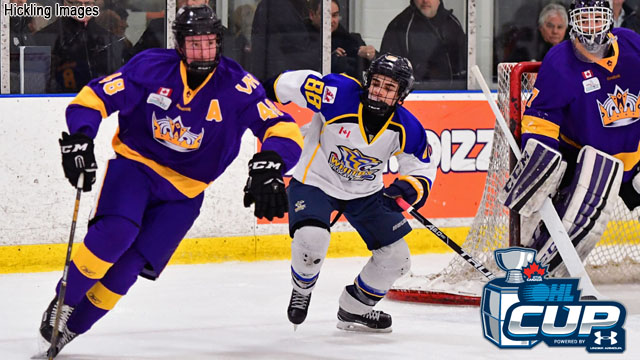 Kosta Manikis scored twice late in the third period, tying the score 3-3 with 27 seconds remaining as the Vaughan Kings battled back to tie the OMHA Champion Whitby Wildcats 3-3.

Down 3-0, Nicholas Porco started the comeback with 3:19 remaining before Manikis drew the Kings within one just 13 seconds later. He was on the doorstep to tie the score off a Nathan Staios point shot inside the final 30 seconds.

“We’re lucky tonight because we were kind of sleeping in the first 40 minutes,” said Manikis. “The last five of that game is more how we’re used to playing. They played us tough and they are a very fast team, but I liked that we never gave up.”

Brett Benham had a pair of goals for Whitby while Jacob DiDanieli also found the back of the net before a goaltending change seemed to inspire a better effort from Vaughan.

Christian Sbaraglia made some key saves in relief to help backstop the Kings to a point while Brendan Sellan and Nathan Staios each had two assists.