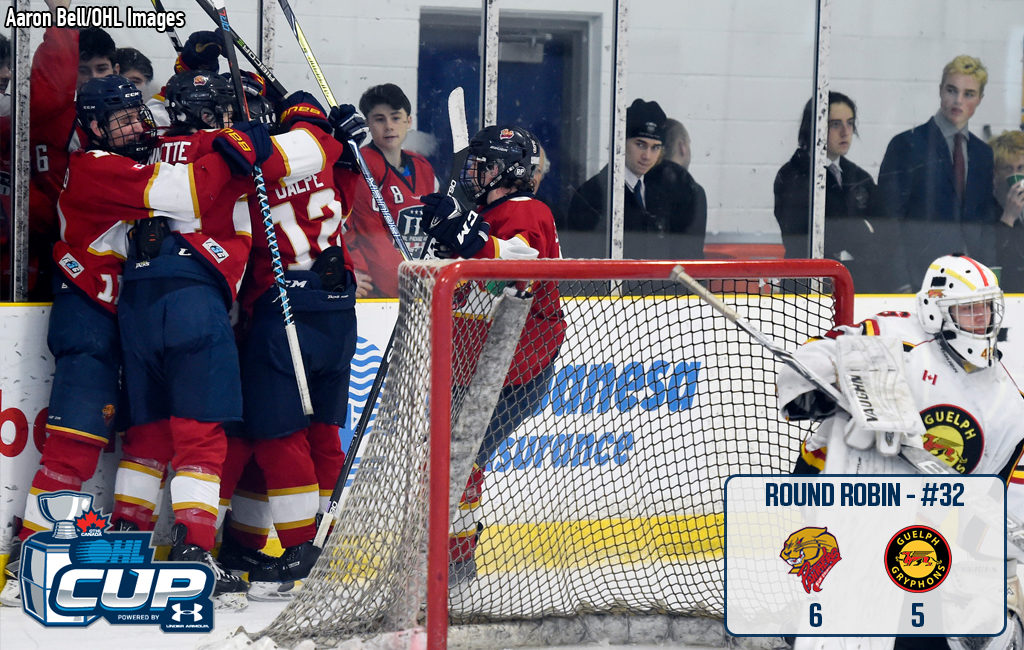 After an overtime winner on Wednesday, John Ulicny stepped up as the hero again Friday morning, pushing the Sun County Panthers into the OHL Cup quarter-finals with a 6-5 win over the Guelph Gryphons.

Ulicny (3) beat a screened Hayden Dunford over the shoulder with one minute left in the third period as the Wild Card entry Panthers overcame a 4-2 deficit to advance to the playoff portion of the OHL Cup for the first time since 2003.

“It’s a thrill,” he said, “we kind of came here as underdogs and we’re keeping that mindset. We’ve got a real good test against the Marlboros coming up that will prepare us for tomorrow and we’re going to be ready.”

Down 4-2 midway through the second period, Zane Dalpe (1), Liam Hall (1) and Braedan Catano (1) scored Sun County goals to put them in the lead 5-4. Guelph captain Joseph Marra responded (1) with 2:15 left to pull the Gryphons into a 5-5 tie before Ulicny scored the game winner.

“It’s all hands on deck,” Ulicny continued. “We need everyone to do their part if we are going to win this thing.”

The Gryphons round out their schedule with a 1-3-0 record as Jackson Kirk (1, 2) and Logan Morrison (3, 4) both scored twice while Owen O’Donnell and Brody Waters each had two assists.

Guelph went 3-for-8 on the power play while Sun County took the shooting column 34-32.