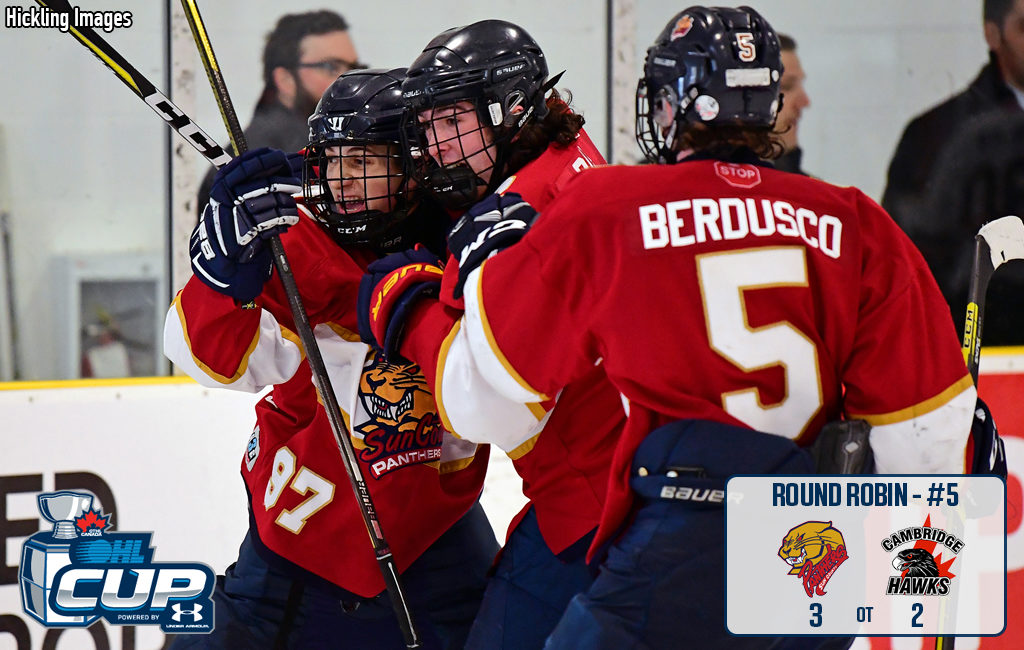 John Ulicny’s (1, 2) second of the morning 1:22 into overtime gave the Sun County Panthers a 3-2 overtime win over the rival Cambridge Hawks to start Day 2 of the 2018 OHL Cup Powered by Under Armour.

The Panthers, who were eliminated by Cambridge in three-straight ALLIANCE Wild Card Series contests, defeated the Toronto Titans in Wild Card Play-In action yesterday and came back to haunt Cambridge as Ulicny tipped in a Brendan Kennette point shot for the game winner.

“It was a perfect shot, about six inches off the ice and I just got a piece of it,” said Ulicny, who scored a highlight reel marker earlier in the game. “They beat us pretty good in the ALLIANCE Playoffs, but we came together here and pulled off a really important win.

“We’re here with a purpose and I think we’re all pretty happy about the way we have played as a team so far.”

The Panthers pressed hard down a goal late in the third, sending out the extra attacker as Aleksa Babic (1) crashed the net to tie the score at two with 1:01 left on the clock.

Nicholas Chenard, who made 42 saves in Tuesday’s Wild Card win, turned aside an additional 34 while Ulicny led offensively with two goals and an assist.

Mason Mantzavrakos (1) and Eli Palfreyman (1) scored goals for Cambridge while Vance Meyer made 25 saves in goal.