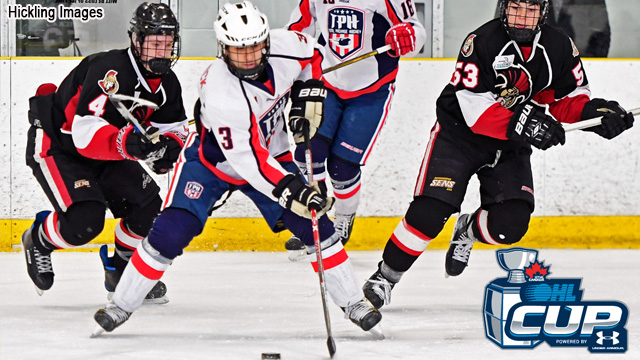 Max Klanow and Dylan Wendt each had a goal and two assists as the TPH Thunder got better as the game progressed in a 5-1 win over the Mississauga Senators.

Holding a one-goal lead for much of the game, TPH pulled away late by scoring three times in the final five minutes to put an exclamation mark on the win.

“That’s why we’re here,” said assistant coach Brandon Naurato. “We want to expose these kids to the Ontario Hockey League and put them up against Ontario’s best competition. We’re playing some teams that were in the OHL Cup Top-10 Rankings and it has proven to be a good challenge.”

TPH improves to 2-1 and sits tied with the Toronto Jr. Canadiens for second place in the Subban Division. They face the London Jr. Knights in a highly anticipated matchup on Friday afternoon while JRC will take on the Brampton 45’s.

Nicholas Wong provided Mississauga’s lone goal in the loss as the Sens close out their OHL Cup with an 0-3-1 record.