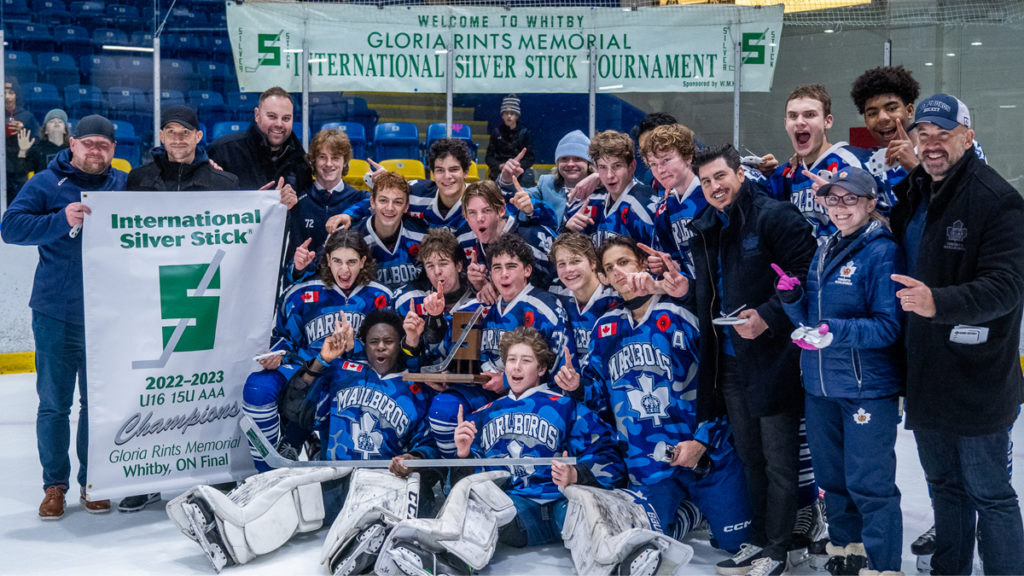 As his ’07 Toronto Marlboros team celebrated their Silver Stick Championship in the locker room, the memories began to come flooding back for head coach Richard Power.

“It was a special feeling,” Power said, as he reflected on winning one of minor hockey’s finest achievements all over again. “It’s the first time I’ve been back in this building with another team, and to win it ‘back-to-back’ is incredible.”

It was just four years ago when Power took his ’02 Marlies into championship Sunday to come back down 3-0 late against the Oakville Rangers to win in overtime. This time around, it would be the Marlboros who took control of the game from the get-go.

Behind a pair of goals from tournament scoring leader Lev Katzin, as well as markers from Joseph Cadorin and Matheas Stark, the Marlboros would defeat the Bishop Kearney Selects by a score of 4-1 as the #1 team in the first edition of the OHL Cup Rankings claimed their first tournament victory of the season. The Marlboros played to a perfect record of 7-0.

“I’m so proud of them,” Power continued. “We came up short at the Titans Early Bird tournament, but I thought this weekend we had some players really step up.”

One of the many players that was able to elevate their game was Marlboros goaltender Jaeden Nelson, who was tremendous between the pipes all weekend long, especially on Sunday afternoon, shutting down a potent BK Selects offence.

“It was a great team effort all around,” the Marlies goaltender said. “Going into it, we knew there was going to be a lot of pressure to win it all, but we battled every game, came out strong, and we were fortunate to come out on top.”

“You don’t get to the Silver Stick championship without getting good goaltending, and we had a pretty great combination for us this weekend,” Power said, praising both netminders in Nelson and Crosby Da Costa. “They were making big saves, and their angles were exceptional, definitely the MVPs in our own zone.”

A member of the OHL Cup champion ’06 Mississauga Senators, Moore and his Senators teammates came up short in last year’s Silver Stick, falling 3-2 to the rival Toronto Jr. Canadiens.

Not many get to redeem their loss at the prestigious tourney, so for Moore, this victory was something special for both his current and former teammates.

“It felt amazing, it was so great to see that all the effort our team put into this tourney resulted in a big win for the boys,” Moore said, who was also named tournament MVP, tallying 12 points in seven games.

“It was a disappointing result last year, I wanted to make sure that we didn’t have to go through the same negative emotions this time around, by playing the best I could play and helping the team out as much as possible.”

Moore and the Marlies won’t have to travel very far for their next tournament, as they host the Marlboros Holiday Classic, where they will look to win their second consecutive tournament, this time on home ice from December 27-30.