Titans cruise to 7-1 win over Kitchener 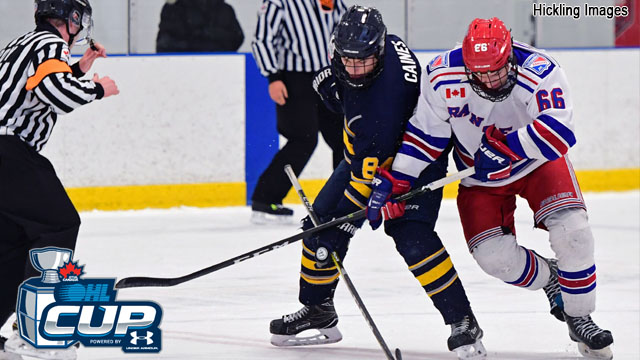 The Toronto Titans are the third wild card entry established on Tuesday, handing the Kitchener Jr. Rangers a 7-1 defeat.

Alec Lovisek and Connor LePage each had a pair of goals while defenceman Jaden Condotta racked up three assists as the Titans power play scored four times in the victory. John Schipani, Harrison Caines and Brannon Butler also lit the lamp for the Titans.

“We really stuck to our systems and had a lot of success on the power play,” said Condotta following the win. “We’ve practiced a lot and worked on our power play, so I felt like we were all pretty familiar with the plan today.”

Lovisek finished the afternoon with two goals and two assists as the Titans are back at the OHL Cup following an absence last year.

“It feels great,” Condotta added. “We’re coming off a big series win over the Nats and I feel like our team is playing really good hockey right now.”

Cole MacKay scored the lone goal for Kitchener as the Jr. Rangers see their campaign come to an end.

The Titans will compete in the Lindros Division alongside the Whitby Wildcats, Waterloo Wolves, Vaughan Kings and Team NOHA.