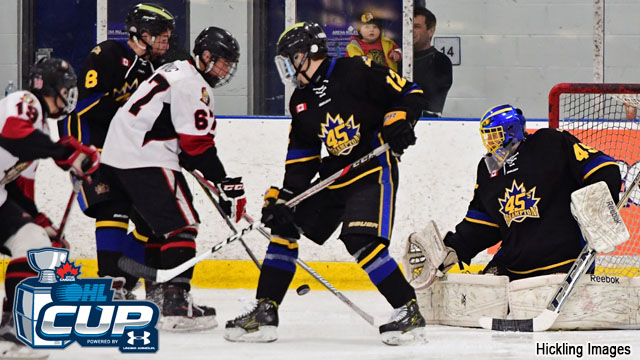 Justin Nolet scored midway through the third period to help the Mississauga Senators avoid an 0-2 start to the OHL Cup as the final game of Wednesday’s action ended in a 1-1 tie.

The Sens tied the Brampton 45’s who took an early 1-0 lead on a goal by Remy Dal Ben but wouldn’t score again as both clubs earned a point in the standings.

Brampton goaltender Sebastian Labora was a difference-maker, earning Player of the Game honours for his club as the 45’s also avoided an 0-2 start.

“He was pretty good for them and made some nice saves,” said Nolet of Labora. “I thought we played pretty well and kept the pressure on them but couldn’t find that second goal.”

The Senators lost to the London Jr. Knights earlier on Wednesday and keep themselves competitive in the Subban Division salvaging one point in the tie.

“I know we didn’t win today but I think we’re playing pretty good, we just have to find the bounces,” Nolet added. “We’ll be ready to go tomorrow.

The Senators will square off with the Toronto Jr. Canadiens on Thursday afternoon. Brampton will face the London Jr. Knights at noon on Thursday.