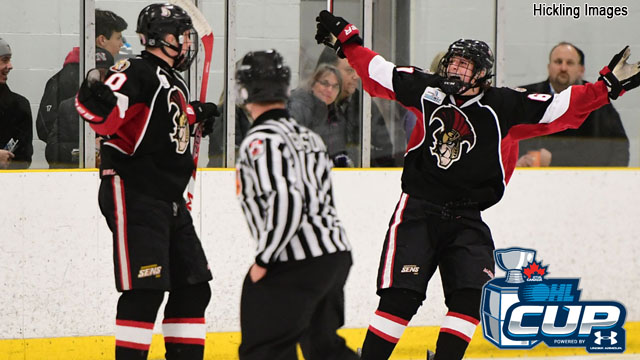 Deacon Holmes was the double overtime hero, blasting a shot past York-Simcoe Express goaltender Diam Matthew with 4:56 left on the clock to send the Mississauga Senators to the 2017 OHL Cup Powered by Under Armour with a 2-1 win.

Holmes didn’t have a target in mind, but found the right spot on a goal he won’t soon forget.

“The puck just came up the wall and I just threw it towards the net. I didn’t see a whole lot to shoot at, so I just wanted to try and hit the net.”

Holmes ended a lengthy stalemate that was prolonged by the strong goaltending of Matthew in the York-Simcoe crease while Mississauga’s Dante Fernandes provided a few game-saving stops of his own.

“Our goaltender was fantastic,” added Holmes. “I was really happy with our team speed, not just offensively but defensively on the back check, especially in overtime. We had to really watch a few of their players and I felt we did a good job of that.”

Dustin Hutton provided Mississauga’s other goal in the win while defenceman Cameron Fulop scored for the Express.

The Sens victory completes a clean sweep for the GTHL on Wild Card Play-In Day as the Mississauga Reps, Toronto Young Nationals and Toronto Titans were also victorious.

The Senators will compete in the Subban Division alongside the London Jr. Knights, Brampton 45’s, Toronto Jr. Canadiens and TPH Thunder.