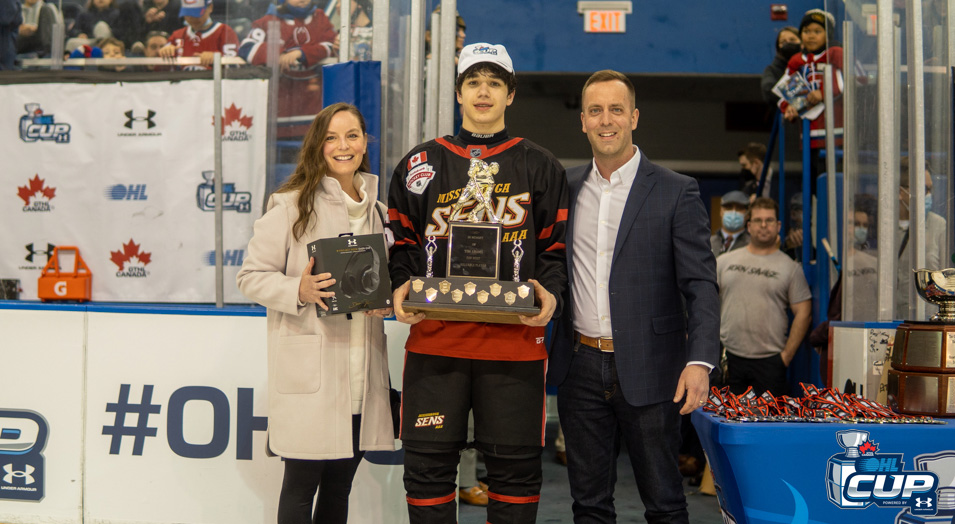 Misa has been awarded the Tim Adams Memorial Trophy, given annually to the Most Valuable Player of the U16 AAA Showcase.

“All of those superstars, those are guys I model my game after,” said Misa, when asked what it’s like to have his name among elite company in Connor McDavid and Shane Wright following his impressive OHL Cup performance. “They push me to get better and I want to be like them in the future.”

The 2007-born Oakville, Ont. native put together the first hat trick in OHL Cup Championship history, also establishing a new single game points record in the Final with five. Misa assisted on a third period goal by teammate Bode Stewart to give him 10 goals, 10 assists and 20 points, surpassing Connor McDavid’s 2012 event benchmark. The 20 points are more than any player since 2003 when the OHL Cup Showcase introduced its current format.

After posting two assists in the club’s Wild Card Play-In victory over Ajax-Pickering, Misa proceeded to record points in six of his seven games, with multi-point outputs in each instance. He had two goals and two assists in an 11-4 win over the Hamilton Jr. Bulldogs and had three points against Elgin-Middlesex, as well as in Quarter-Final action against London and Semi-Final success against the Markham Majors.

Misa finished tied for the showcase lead in shots on goal with 31 and won 52 of his 83 face-offs, good for a 62.7 percent success rate.

He becomes the first Mississauga Senators player to earn the award, and follows Wright (2019) and McDavid (2012) as the third underage player to claim showcase MVP honours.