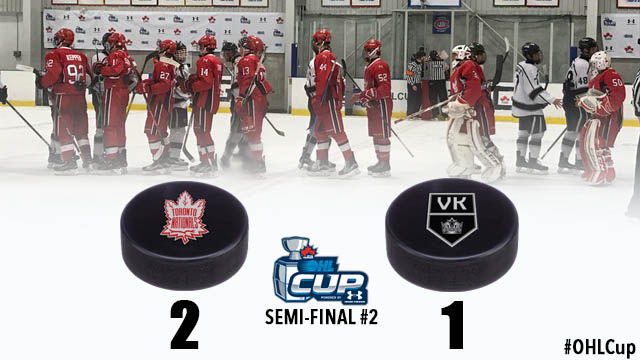 The Toronto Young Nats are headed to their first OHL Cup Final since 2003 after Bradley Somers scored twice in a hard-fought 2-1 Semi-Final win over the Vaughan Kings on Saturday.

Somers scored a pair of first period goals while Vaughan’s Drew Ferris tallied for the Kings as the two clubs ended the first with the Nats leading 2-1.

A 25-save performance from goaltender Zach Roy ensured that’s how the score would stay as the Nationals held off a late Kings push to punch their ticket to Monday’s OHL Cup Championship Final at the Mattamy Athletic Centre in downtown Toronto.

“It’s a great time for me to step up,” said Somers after the win. “Big game, semi-final and I was able to score a couple goals. Our whole team played well and we shut them down.”

Hug it out boys!

The 5-1-0 Nationals will meet a GTHL opponent in the Mississauga Reps in Monday night’s Championship game as the two clubs battle in the first all-Wild Card entry Championship matchup in OHL Cup history.

The Vaughan Kings close out their 2017 OHL Cup Showcase with a 3-1-2 record, reaching the Semi-Final for the first time in their history at the OHL Cup. Brendan Sellan led the Kings in scoring with six points (1-5–6) over as many games while Drew Ferris led the team in goals with four.

Kings netminder Christian Sbaraglia leads all goaltenders with a 1.18 goals-against average over 203 minutes of work while his .955 save percentage places him fourth.

VIDEO: Bradley Somers scores his first of two goals for the Toronto Nats.