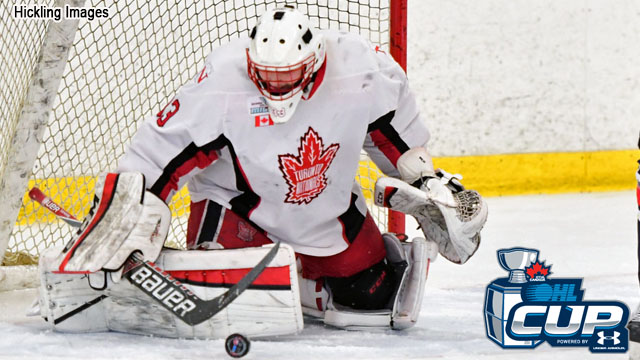 Zach Roy was a difference-maker, turning aside 28 shots to shut down the Quinte Red Devils in a 4-0 Toronto Young Nats victory on Friday afternoon.

Bradley Somers, Jordan Power, Brendan Bowie and Robert Calisti had goals as the Nats secured a spot in Saturday’s quarterfinal round while Roy, who leads OHL Cup goaltenders with 180 minutes played, registered his second shutout.

“We’ve had injuries to some pretty good players in Primeau and Foster and had a disappointing playoff run but we battled through adversity and made it through to the quarterfinals,” said Roy. “That’s an accomplishment considering this is a really tough tournament to win.”

With the numerous scouts in attendance, Roy says he got the butterflies out of his system early.

“The first few games were a little nerve-wracking,” he said, “but that feeling has gone away now and I feel really comfortable in the crease. This is another stepping stone to the next level and I’ve really enjoyed it.”

The Nationals wrap up their round-robin schedule with a 3-1-0 record while Quinte finishes at 1-3-0.

The Red Devils were led in scoring by Jake Campbell (2-2–4) and Emmet Pierce (0-4–4) who each had four points in as many games.