Road to the OHL Cup: Surveying the OMHA’s ETA circuit 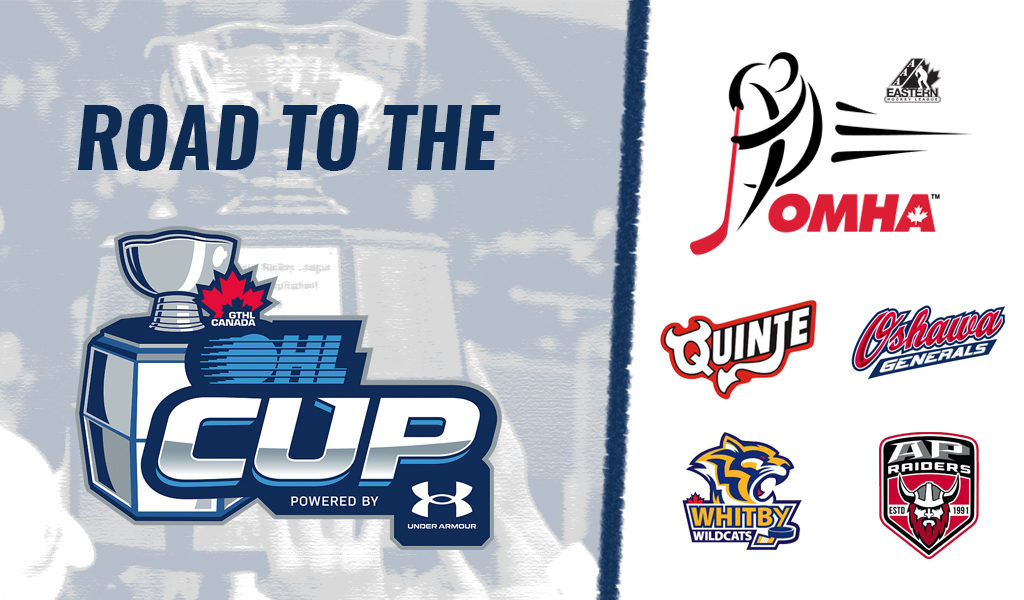 The OMHA’s ETA circuit is down to its final four with a pair of Game 3 semi-final matchups slated for Wednesday.

Having rode a stretch of nine consecutive weeks atop the OHL Cup Powered by Under Armour Minor Midget Top-10 earlier this season, the now-second ranked Quinte Red Devils hold a 4-0 (pts.) edge on the Oshawa Generals in one series, while a pair of honourable mention teams in the Ajax-Pickering Raiders and Whitby Wildcats are tied at two in the other.

The Red Devils seem to be the OMHA ETA’s team of destiny this season. The 2020 OMHA Championship hosts finished first in the regular season with a record of 28-5-3, outscoring opponents 195-63. Following a first round bye, they eliminated the Barrie Colts in a hard-fought five-game series and have taken 6-1 and 4-1 wins over Oshawa entering Wednesday’s Game 3.

“If they play the way they did around the Silver Stick and the Marlies Tournament they’re one of the best teams out there,” said Director of OHL Central Scouting Darrell Woodley. “They gave Honeybaked a couple really good semi-final games and they’ve shown that they can play with the best.”

“He plays the game right, and he plays a heavy game,” Woodley said of the aforementioned Wakely. “He doesn’t shy away and he plays 200 feet. He’s not one of those offensive guys that cheats to put up points, he comes back and does the whole job.”

Quinte faces an Oshawa program having one of its best Minor Midget seasons in recent memory. The Generals played to a 22-10-4 mark during the regular season and have a chance to make it into the OHL Cup Powered by Under Armour for the first time in the showcase’s modern era. Should they be eliminated in their series with Quinte, they’d still have an opportunity to win a one-game playoff against the loser of the series between Ajax-Pickering and Whitby to advance to the OMHA Championships.

“They’ve had a lot of kids stay in Oshawa this year as opposed to going to Ajax-Pickering or Whitby to play,” said Woodley of the Generals’ success. “Their captain Nathan Poole isn’t flashy, but he’s effective and he works as hard as anyone. Carson Christy is their big offensive catalyst and he led the ETA in goals with 41 this season.”

The Generals suffered an unfortunate loss when they lost one of the ETA’s best goaltenders in Chazz Nixon to injury late in the season. Carter Bickle has carried the load in the crease in his absence as he looks to backstop Oshawa to the big stage in the weeks to come.

In the other semi-final a closely matched Durham region matchup is knotted at two points apiece as the second-place 24-7-5 Whitby Wildcats battle the sixth-place 18-11-7 Ajax-Pickering Raiders.

A frequent find in the OHL Cup Top-10’s honourable mention category this season, Whitby looks to get back into the showcase for the third time in the past four seasons but they’ll have their hands full with an Ajax-Pickering squad that has returned to health after a season plagued by injuries.

“The Wildcats might be looking for a low-scoring series,” said Woodley of the matchup. “They’re not an offensive juggernaut but they’ve got a couple good goalies in Andrew Ballantyne and Nolan Dunn and one of the league’s top defencemen in Nolan Collins.”

Ajax-Pickering took Game 1 of the series by a score of 4-2 before Whitby responded with a 6-4 win on Sunday.

“They’ve battled injuries all year, but they’ve got a lot of their pieces back in place now and I think they’re a team to keep a close eye on,” stated Woodley. “Everyone was really excited about Ajax-Pickering before the season got started, and I don’t know that they’ve really lived up to that hype, but if you look at their games lost to injury this year it’s got to be one of the highest in minor hockey. They might be hitting their stride at the right time.”

The winners of the two semi-final series will advance to the OMHA Championships from March 6-8 in Belleville, Ont. Should the host Quinte Red Devils advance, the winner of an OMHA ETA Wild Card Play-In game would also earn a spot in the five-team showdown that also features the top two teams from the OMHA SCTA ranks.

*** The Toronto Jr. Canadiens, Toronto Nationals, Toronto Marlboros and Vaughan Kings have all qualified for the 2020 OHL Cup Powered by Under Armour

*** The Elgin-Middlesex Chiefs and Hamilton Huskies have both qualified for the 2020 OHL Cup Powered by Under Armour. The winner of the ALLIANCE Wild Card Play-In Series will also qualify.

***The Southern Tier Admirals, Niagara North Stars, Oakville Rangers and Buffalo Regals emerged from the SCTA double-round robin to compete in a pair of semi-final series. The two series winners will advance to the 2020 OMHA Championships held March 6-8 in Belleville, Ont. The 1st, 2nd, 3rd and 4th place teams at the OMHA Championships will qualify for the 2020 OHL Cup.