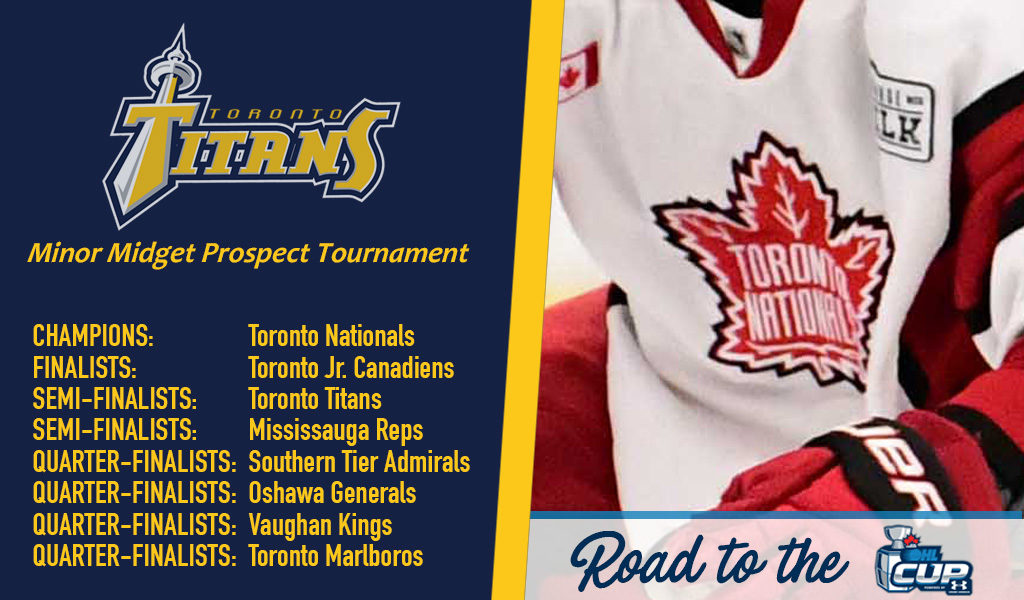 The 2019-20 Minor Midget season got off to a running start in Toronto this past weekend as the Titans held ther 12th annual Prospects Tournament with 53 teams in attendance.

In what’s been considered an underdog triumph by many, the Toronto Nationals stopped the powerhouse Toronto Jr. Canadiens, taking a 5-2 victory in Sunday’s Championship Final, overcoming a 2-0 deficit with five unanswered goals.

Wilson Farrow scored the game winner with 4:13 remaining in the third period while Kyle Downey backstopped his team to victory. The Nats finished with an overall record of 8-0 in a tournament that saw the six of the eight quarter-finalists come out of the GTHL.

“A really interesting finish by a Nats team that was right there all week,” said Director of OHL Central Scouting Darrell Woodley. “The Jr. Canadiens are strong as evidenced by their six players in the tournament’s top ten scorers, but in the end the Nationals got the job done and really put themselves on the map to start the year.”

Nationals forward Zak Lavoie led all players with 10 goals over seven contests, serving as the primary offensive catalyst for his team.

“Nelson is a skilled defenceman who I think got a lot of people’s attention last week,” said Woodley. “He’s very dynamic and a little bit like Victor Mete back when he played for the Jr. Canadiens.”

Outside of the GTHL, a pair of OMHA clubs in the Southern Tier Admirals and Oshawa Generals also reached the quarter-finals, showing early signs as competitive teams to keep tabs on this season.

Though it’s early, scouts were on hand to get a glimpse of what’s in store for the 2019-20 campaign and who might be flying high on the radar for the 2020 OHL Priority Selection.

The Titans will hold their 7th annual Major Midget Prospect Tournament from September 17th to 22nd.