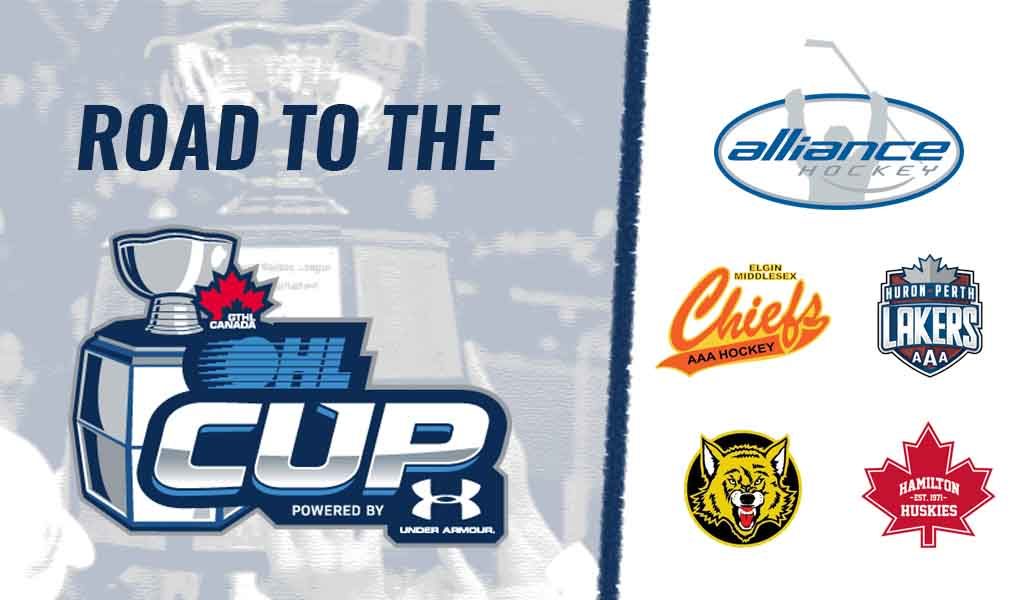 The 2020 OHL Cup Powered by Under Armour is just over a month away and four ALLIANCE teams have guaranteed themselves, at the very least, a wild card play-in game.

The Elgin-Middlesex Chiefs, Huron-Perth Lakers, Hamilton Huskies and Waterloo Wolves have emerged as the league’s final four. The top three will advance to the OHL Cup while the loser of a Semi-Final Wild Card Series will play for a spot in the annual showcase on Tuesday, March 17th.

The heavily favoured Elgin-Middlesex Chiefs played to an undefeated regular season record of 25-0-8, outscoring opponents 147-55 while holding down a spot no lower than seventh in each of the 10 editions of the weekly OHL Cup Top 10 Rankings released this season.

The Chiefs, who boast highly touted 2020 OHL Priority Selection prospects in forwards Hunter Haight (32-26–58), Brady Stonehouse (22-32–54) and ALLIANCE scoring leader Owen Van Steensel (23-39–62), hit a wall in their first round series with the Lambton Jr. Sting. After winning Game 1 by a score of 7-0, Lambton battled back to win Games 2 and 3 by scores of 4-3 and 6-5. The Chiefs rallied to victory in Games 4 and 5 though, eliminating Lambton in a 7-4 victory on Tuesday.

“When they want to flex their muscle offensively they can do so,” said James Kennedy, who serves as an ALLIANCE scout for OHL Central Scouting. “They’ve got a very strong power play and some really high end talent on their team.

“They won Game 1 7-0 and they sort of sat back a little bit,” Kennedy said of the Lambton series. “I think it was a good lesson for them, especially early in the playoffs before they face a team that might have been able to put them away. They managed to bounce back though and still look like they have a real good shot at winning the ALLIANCE this year.”

Elgin-Middlesex will have to get through the Huron-Perth Lakers in semi-final play. The Lakers eliminated the Windsor Jr. Spitfires 7-3 in points in their first round series after finishing tied with Windsor for fourth place during the regular season. Cory Jewitt led Huron-Perth in regular season scoring with 41 points (20-21–41) while centreman Carter Coombs (20-17–37) proved to be one of the ALLIANCE circuit’s dependable attackers alongside top blueliner Ethan Coups (2-12–14).

The second place Waterloo Wolves (25-4-4) and third place Hamilton Huskies (22-7-4) will lock horns in the ALLIANCE’s other semi-final series. The Huskies have been inside the OHL Cup Top 10 in eight of the 10 weeks so far this season while the Wolves have hung around the honourable mention category. Waterloo won all three meetings between the two clubs during the regular season.

“I think it’ll be a long series,” said Kennedy. “Waterloo didn’t allow any goals in the last two games of their series against London and they’ve got a really good defence corps. They’re a tight-checking team and they’re hard to generate scoring chances off of.”

“Hamilton is a bit the opposite where they’ve got some more depth and scoring threats up front,” noted Kennedy. “Defensively they’re not bad either but they do allow more scoring chances than Waterloo does.”

The Huskies, who haven’t made an appearance at the OHL Cup since back in 2005 as the Hamilton Reps, feature talented forwards in Justin Dezoete (25-30–55), who leads the ALLIANCE playoffs in scoring with nine goals, along with Cristobal Tola (15-18–33) and Patrick Thomas (23-33–56). Goaltender Riley George (2.03 GAA, 3 SO) has carried the load for Hamilton throughout the playoffs.

*** The champion, finalist and third place team qualify for the 2020 OHL Cup

***The SCTA’s 10 teams have been assigned to two groups where they will take part in a double round-robin. The top two teams from each group will compete in a semi-final series to determine which two clubs will advance to the OMHA Championships set for March 6-8 in Belleville, Ont. The 1st, 2nd, 3rd and 4th place teams at the OMHA Championships will qualify for the 2020 OHL Cup.

The Southern Tier Admirals finished atop the regular season standings with an overall record of 24-3-5, they were followed by the second place Niagara North Stars at 17-7-8 and the third place Oakville Rangers at 17-9-6.

The SCTA double round-robin is ongoing. For updates, visit sctahockey.com.