Road to the OHL Cup: A look at OMHA SCTA squads still in the hunt 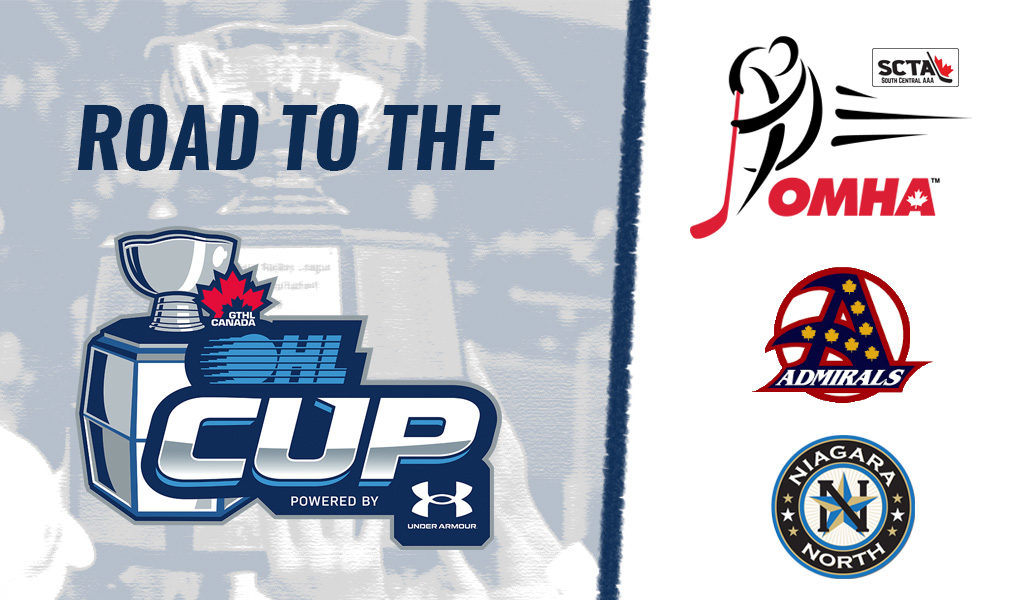 The OMHA Minor Midget AAA Championship is underway in Belleville, Ont. with five teams battling for four guaranteed spots at the 2020 OHL Cup Powered by Under Armour that begins Tuesday, March 17th at the Scotiabank Pond in Toronto.

The host Quinte Red Devils won their way into the final five, making way for the Oshawa Generals to win a one-game playoff over the Ajax-Pickering Raiders to qualify for the big dance. The Whitby Wildcats round out the three OMHA ETA teams participating while a pair of OMHA SCTA clubs are also fighting for a spot in Toronto including the Southern Tier Admirals and Niagara North Stars.

We’ve already surveyed the OMHA ETA ranks, and today we turn our attention to the two OMHA SCTA teams still in the hunt for a spot at the annual showcase.

The Southern Tier Admirals have been included on all 14 editions of the weekly OHL Cup Powered by Under Armour Minor Midget Top-10 Ranking instalments this season, finishing first in the league with a 24-3-5 record for 53 points. They outscored their opponents 153-56 and featured the most dangerous line in the league with Andrew LeBlanc (25-43–68), Sam Alfano (36-27–63) and Trent Swick (26-29–55) finishing 1, 2, 3 in league scoring.

“They’re one of the best units in Ontairo, no question,” said Director of OHL Central Scouting Darrell Woodley, “but they do rely on them a lot. It’ll be interesting to see how they fare at the OMHA Championships and if they can get there, into the OHL Cup with the way they’ve utilized that big line throughout the year.”

The Admirals have benefited from a productive power play that includes their big three alongside LeBlanc’s twin brother Jacob LeBlanc (5-22–27) on the blue line alongside Luke Gualtieri (9-18–27).

“Yeah you don’t want to take penalties against them,” Woodley continued. “They’ll make you pay.”

Southern Tier emerged from the OMHA SCTA Group A Play-off round robin with a 7-0-1 record before eliminating the Oakville Rangers in five games to book their ticket to Belleville.

Their OMHA SCTA counterpart the Niagara North Stars gained entry into the OMHA Championship by way of a 5-1-2 showing in the round robin, dropping a 3-2 decision against Southern Tier on Jan. 29th. They went on to best the Buffalo Regals in five games to secure their spot in the championship.

“Next to Southern Tier they were the most consistent team of the bunch,” said Woodley. “They’ve got a pretty steady blue line that can move the puck. I wouldn’t say they have a big time star on their team, but guys like York and Whitcomb are both solid players who aren’t overly flashy but they find ways to produce.”

The Admirals and Stars played to a 3-3 tie on Friday morning in Belleville, with Southern Tier erasing a 3-0 deficit in the third period on a pair of goals from Alfano before Gualtieri scored the equalizer with 3:20 to spare.

***The Toronto Jr. Canadiens, Toronto Nationals, Toronto Marlboros and Vaughan Kings have all qualified for the 2020 OHL Cup Powered by Under Armour. The Toronto Titans have earned an OHL Cup Wild Card Play-In Game.

*** The Elgin-Middlesex Chiefs, Hamilton Huskies and Waterloo Wolves have qualified for the 2020 OHL Cup Powered by Under Armour. The winner of an ALLIANCE Wild Card Series between Huron-Perth and Windsor will earn an OHL Cup Wild Card Play-In Game on Tuesday, March 17th.