Road to the 2018 OHL Cup: Stage set for ALLIANCE Semi-Finals 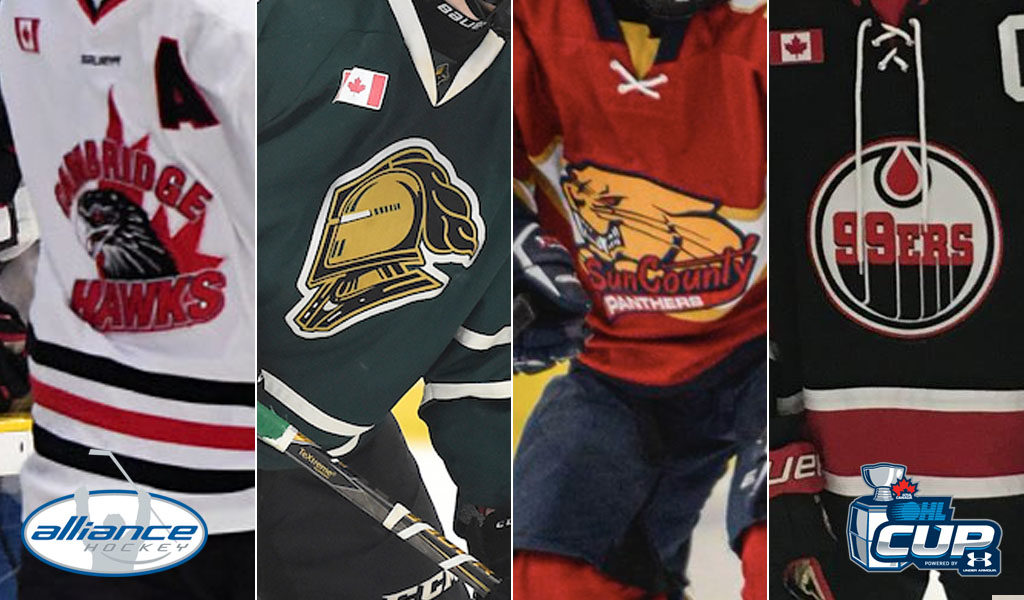 Three OHL Cup berths are up for grabs between four remaining ALLIANCE clubs, leaving the Cambridge Hawks, Brantford 99’ers, London Jr. Knights and Sun County Panthers to battle it out to the finish.

The province’s tenth-ranked Hawks have set the pace this season, playing to a 26-2-5 regular season record before eliminating the Chatham-Kent Cyclones 3-2 in their first round series. They’ve been included in the weekly Top-10 in 10 of the 13 editions this season.

“They’ve been the best in the ALLIANCE throughout the entire season,” noted Director of OHL Central Scouting Darrell Woodley. “They’re a team that plays a lot like their coach – quick, hard-working and very competitive.”

The Hawks are preparing for a second round series against the fourth place Brantford 99’ers, a team that hasn’t made an OHL Cup appearance since 2009.

Brantford comes off a 7-5 series win in points over the Waterloo Wolves, eliminating them in Game 6 on Tuesday by a score of 3-2. Steady defenceman Dylan Robinson logs big minutes for the 99’ers and finished the season with 22 points (3-19–22) in 32 games. Up front, Andrew Casasanta led the club in scoring with 38 points (13-25–38) over 33 contests while Theoren Hill and Tanner Bibby were also regular producers.

Brantford features some underage talent as well. 2003-born competitors in Maddox Callens (15-18–33) and Cole Hipkin (5-19–24) have played contributing roles in the team’s success this season.

In the other semi-final series, the London Jr. Knights are looking to secure their fourth straight OHL Cup appearance but will have to get through the Sun County Panthers if they hope to do so.

The Jr. Knights feature the ALLIANCE circuit’s leading scorer in undersized forward George Diaco who led all players with 23 goals to go with 29 assists for 52 points in 33 games. In addition to his dominance, London has a number of high quality options both up front and on the blue line.

“They might have the most depth in the league,” said Woodley. “They’re one of those teams that has had a hart time putting it all together, but guys like (Brendan) Mairs, (Quinton) Pepper, (Joey) Studnicka and (Sheldon) Serraglio are all big parts of that team along with goaltenders Jackson Mailloux and Tim Kerkhoff.

The Jr. Knights go up against the league’s top offence led by standout forward Matthew Maggio. The Sun County Panthers finished just one point behind London this season, defeating the Jr. Knights in two of their three meetings.

“Maggio is probably the most skilled kid in the ALLIANCE this year,” noted Woodley. “He’s got a lot of speed, has a creative offensive mind and uses his great shot as a real weapon.”

Maggio put up 44 points (20-24–44) this season while Zane Dalpe trailed close behind with 38 (16-22–38). Two-way centreman Ryan Gagnier serves as one the Panthers’ most underrated players, seeing key faceoffs and assignments in all three zones.

The winners of the two ALLIANCE semi-final series will advance to the league championship and punch their ticket to the 2018 OHL Cup Powered by Under Armour. The losing teams of the two current series will square off in an ALLIANCE Wild Card Series with the victor securing an OHL Cup berth and the loser earning an OHL Cup Wild Card Play-In opportunity.

Here’s a look at playoff progress across the province.

*** The champion, finalist and third place team qualify for the 2017 OHL Cup

***The SCTA qualifier weekend took place February 10-11 in Fort Erie, ON. The champion and finalist from that tournament will compete against the champion and finalist from the ETA along with the host York-Simcoe Express in the 2018 OMHA Championships at St. Andrew’s College in Aurora, ON from March 2-4. The 1st, 2nd, 3rd and 4th place teams at the OMHA Championship will qualify for the 2018 OHL Cup.

For more information on the 2018 OHL Cup Showcase Tournament Powered by Under Armour, visit ohlcup.ca.