Road to the 2017 OHL Cup: Surveying the SCTA

2017 OHL Cup powered by Under Armour 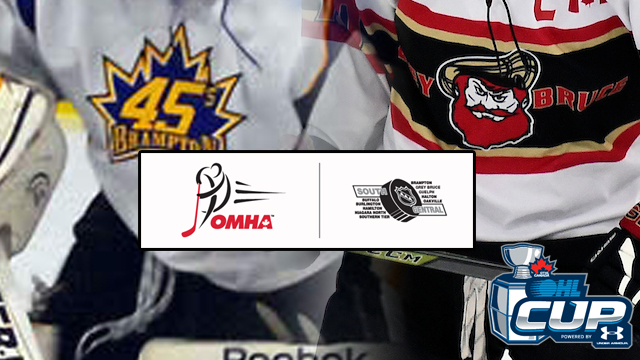 The Brampton 45’s and Grey-Bruce Highlanders have emerged from the SCTA to advance to the OMHA Championships this weekend in Whitby. They join the host Whitby Wildcats along with the ETA’s Quinte Red Devils and Ajax-Pickering Raiders in the five team showdown, with the top four clubs punching their ticket to the 2017 OHL Cup powered by Under Armour.

The first place Hamilton Jr. Bulldogs didn’t manage to make it out of the SCTA Championships on February 12th in Hamilton. Brampton and Grey-Bruce emerged as victors from Group A while Halton and Guelph came out on top in Group B.

Brampton reaches the OMHA Championships by way of a 6-0 series sweep of Halton while Grey-Bruce, the SCTA’s Cinderella story, topped Guelph 6-0 in points.

“It’s a great story and one worth keeping an eye on,” said Director of OHL Central Scouting of the elevated play of the Grey-Bruce Highlanders. “They’ve really come out and shown how capable they are in their play since Christmas. They’re reaching their peak at the right time.”

The Highlanders, who produced 2016 OHL Priority Selection third overall pick Connor Roberts of the Hamilton Bulldogs, played to a 7-22-7 mark during the season, but managed to defeat the powerhouse Jr. Bulldogs 6-2 in the SCTA Championships. They also scored victories over Buffalo and Niagara North while suffering their lone loss to Brampton.

Fleet-footed forward Emmett Sproule has scouts talking with his ability to make plays and make an impact. He and teammate Cameron Lightfoot led the Highlanders in scoring this season with 25 points respectively. Big winger Keegan Foster also boasts projectable size and a good stride while blueliner Eric Lalonde has seen his share of work on the back end.

The second place Brampton 45’s missed out on first place by just one point with a record of 27-6-3 this season. With some key forwards in their lineup, the 45’s have shown themselves capable and are ready for the challenge in Whitby this weekend.

“Andrew Horsley and Brayden Guy are their two big guys up front,” said Woodley. “They’ve managed to spread out the scoring pretty evenly over their top lines and are a team that can show you some different looks offensively.”

Horsley finished second in SCTA scoring with 50 points including 27 goals and 23 assists in 36 games this season while Guy, Brampton’s captain, had 32 points (12-30–32) in 34 contests. Alexandar Dameski, Remy Dalben, Liam Fedak, Chris Ishmael and Jacob Coulson are also regular offensive contributors for the 45’s.

While they aren’t competing in Whitby this weekend, the Halton Hurricanes still have life in their quest for an OHL Cup berth.

The Hurricanes defeated the Guelph Gryphons 2-1 in a one-game OHL Cup Wild Card qualifier game on Monday and will now compete in Wild Card action on Tuesday March 14th.

The Hurricanes finished third in the SCTA regular season standings, finishing with a record of 26-9-1 with 53 points. They’re led from the back end as skilled offensive rearguard Lucas Peric and steady right-hand shot Andrew Brewer offer two different dimensions.

By Sunday evening, four more teams will have reserved their spot in the 2017 OHL Cup powered by Under Armour. An action-packed weekend in Whitby will determine their identities.

***The Mississauga Rebels, Toronto Marlboros, Vaughan Kings and Toronto Jr. Canadiens have all clinched a berth in the 2017 OHL Cup powered by Under Armour.  The winners of both Wild Card Play-In Series matchups will officially qualify for one of the tournament’s four Wild Card entry games.

*** The ALLIANCE Finalist London Jr. Knights and Waterloo Wolves have clinched spots at the 2017 OHL Cup powered by Under Armour. The Kitchener Jr. Rangers and Cambridge Hawks will play a best-of-four series to determine the third ALLIANCE team in the showcase while the loser of that series will play a Wild Card Play-In game.

***ETA finalists the Whitby Wildcats and Quinte Red Devils along with the OMHA Championship Play-In Game winner Ajax-Pickering Raiders will compete along with SCTA Finalists the Brampton 45’s and Grey-Bruce Highlanders in the 2017 OMHA Championships this weekend in Whitby. The 1st, 2nd, 3rd and 4th place teams at the OMHA Championship will qualify for the 2017 OHL Cup powered by Under Armour while the 5th place team will play a Wild Card Play-In game. The SCTA’s Halton Hurricanes have earned an OHL Cup Wild Card Play-In spot after defeating the Guelph Gryphons 2-1 on Monday.

For more information on the 2017 OHL Cup Showcase Tournament powered by Under Armour, visit ohlcup.ca.