2017 OHL Cup powered by Under Armour 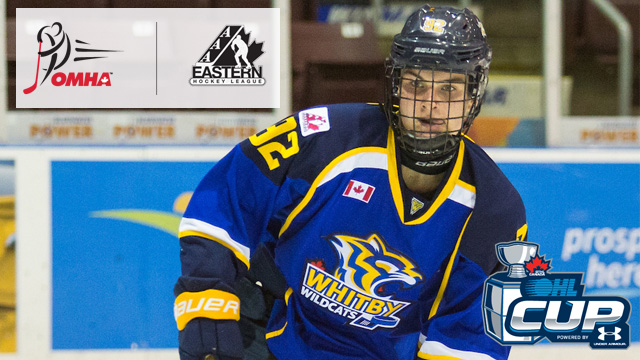 The stage is nearly set for the 2017 OMHA Championships that are fast approaching on the weekend of March 4th and 5th in Whitby where the OMHA’s top four teams will secure a spot in the 2017 OHL Cup Showcase powered by Under Armour.

The host Whitby Wildcats, a group that has enjoyed considerable success together through the years, is considered a favourite in the ETA after finishing first place in the regular season with a record of 31-3-2.

Led by former OHL star and Toronto Maple Leafs forward Rob Pearson behind the bench, the Wildcats enter the OMHA Championships on a 20-game winning streak after finishing the regular season with 14 straight victories before successive playoff sweeps of Peterborough and Ajax-Pickering.

“Whitby is a very deep team,” said Director of OHL Central Scouting Darrell Woodley. “I anticipate that they will have a number of players from their team chosen in the OHL Priority Selection as they feature quite a few well-rounded players that are regular contributors in their lineup.”

The Wildcats are led by power winger Blake Murray who finished the season with 32 goals, 33 assists and 65 points in 41 games. They’ve also benefited from a pair of 2018 OHL Priority Selection prospects in forward Cole Perfetti and rearguard Ryan O’Rourke who have both had big impacts against older competition.

While Whitby took care of the Ajax-Pickering Raiders in one semi-final, the perennially competitive Quinte Red Devils emerged from the other after a 6-0 series sweep of the defending OHL Cup champion York-Simcoe Express.

Led by Pearson’s former Belleville Bulls teammate and fellow 1989 Maple Leafs first round pick in head coach Steve Bancroft, the Red Devils bring a gritty, hard-working group to the table that competes hard for pucks and makes the opposition work for every inch.

Quinte is backed by the strong goaltending of Ethan Taylor while a committee featuring Daniel Panetta, Michael Andrews and hulking winger Emmet Pierce carries the load offensively. Smooth-skating defenceman Cameron Supryka has been a reliable source of minutes for Bancroft, drawing assignments in all situations on the back end.

Whitby and Quinte await the winner of an OMHA Championship Play-In Game between the Ajax-Pickering Raiders and York-Simcoe Express on Sunday at St. Andrew’s College in Aurora to determine the third ETA team that will have a remaining shot at the OHL Cup.

The Express finished the season four points ahead of the Raiders in the ETA West Division, and are led by QMJHL Draft prospect Alex Newhook who led the league with 82 points including 44 goals and 38 assists in 39 games. Underage winger Cameron Butler has also had a big impact despite being a year away from OHL Priority Selection eligibility while reliable two-way centreman Jalen Balbosa and big blueliner Cameron Fulop have also garnered attention.

For Ajax-Pickering, dynamic offensive centreman Connor McMichael has been putting up points all season, finishing 40 games with 40 goals, 30 assists and 70 points. The Raiders lost scoring winger Ian Martin to injury, but have received scoring punch from Jacob Winterton, Nicholas Papadopoulos and Cole Spencer in his absence. Ajax-Pickering has leaned on the solid goaltending tandem of Cole Brady and Damon Beaver throughout the season. The Raiders held a slight edge in the season series against York-Simcoe, going 2-1-1 over four meetings.

“The ETA features a very good crop of players this season,” said Woodley of the league. “Should they get through the OMHA Championships, I think we could see both Whitby and Quinte make some noise at the OHL Cup that is now under a month away.”

With the OMHA Championships just around the corner, here’s a look at the rest of the Minor Midget landscape on the road to the 2017 OHL Cup powered by Under Armour.

***The Mississauga Rebels, Toronto Marlboros, Vaughan Kings and Toronto Jr. Canadiens have all clinched a berth in the 2017 OHL Cup powered by Under Armour.  The winners of both Wild Card Play-In Series matchups will officially qualify for one of the tournament’s four Wild Card entry games.

*** The champion, finalist and third place team qualify for the 2017 OHL Cup powered by Under Armour.

***Two ETA finalists (Whitby Wildcats, Quinte Red Devils), the winner of an OMHA Championship Play-In Game (Ajax-Pickering vs. York-Simcoe) and finalists from the SCTA (Brampton 45’s and Grey-Bruce Highlanders) will compete in the 2017 OMHA Championship in Whitby from March 3-5. The 1st, 2nd, 3rd and 4th place teams at the OMHA Championship will qualify for the 2017 OHL Cup powered by Under Armour.

***The Brampton 45’s, Guelph Gryphons, Halton Hurricanes and Grey-Bruce Highlanders emerged from the SCTA qualifier weekend to advance to the SCTA Semi-Finals for a chance to compete in the OMHA Championships. Two finalists of the SCTA (Brampton 45’s and Grey-Bruce Highlanders) will compete in the 2017 OMHA Championship in Whitby from March 3-5 along with the Whitby Wildcats, Quinte Red Devils and winner of a Play-In Game between Ajax-Pickering and York-Simcoe. The 1st, 2nd, 3rd and 4th place teams at the OMHA Championship will qualify for the 2017 OHL Cup powered by Under Armour.  Halton and Guelph will compete in a single-game consolation with the winner assured a spot in one of our OHL Cup Wild Card Play-In Games.

For more information on the 2017 OHL Cup Showcase Tournament powered by Under Armour, visit ohlcup.ca.