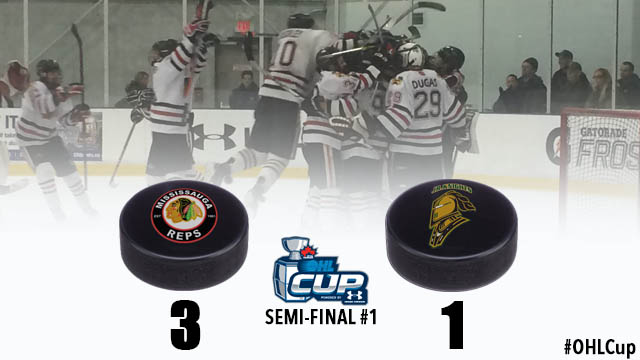 Big players show up in big games and Jamieson Rees did just that.

The dynamic Mississauga Reps forward scored a pair of second period goals 1:17 apart to put his team in the driver’s seat for good in a 3-1 Semi-Final triumph over the previously undefeated London Jr. Knights.

While Rees was recognized with Player of the Game honours for his performance, he was quick to give credit to goaltender Ryan Dugas who turned aside 43 shots including a late Liam Van Loon penalty shot to seal the deal and send the Reps to their first OHL Cup Championship Final.

“He’s been playing unreal and we need that. We need strong goaltending and if he keeps that up that’s all we need,” Rees said.

OHL Cup scoring leader Mike Petizian registered two assists to bring his tournament total to four goals, seven assists and 11 points. He, Rees and Aaron Jamieson have been a consistent force throughout the showcase.

“Aaron is a new addition to our line this year but me and Mikey have been playing for the Reps for about seven years now,” Rees noted. “Our chemistry is just unbelievable.”

This calls for a celebration.

Blueliner Thomas Munro tacked on an insurance marker inside the final minute of the second period to give the Reps some breathing room before London came out for the third and outshot them 16-3.

The Reps become the first Wild Card entry since the 2010 Champion Mississauga Rebels to reach the OHL Cup Final, playing to a 5-0-1 record following Tuesday’s Wild Card Play-In win over the Halton Hurricanes.

The Jr. Knights outshot Mississauga 44-24 but couldn’t find a way to solve Dugas. Liam Van Loon’s third of the tournament 3:47 into the second period was their lone goal in the loss.

The ALLIANCE Champion London Jr. Knights end their 2017 OHL Cup Showcase with a 5-1-0 record. They were led in scoring by Van Loon, who recorded three goals, four assists and seven points over six games.

The Mississauga Reps will play in their first ever OHL Championship Final on Monday at the Mattamy Athletic Centre in downtown Toronto at 6:30pm. The game will be broadcast across the province on Sportsnet Ontario.