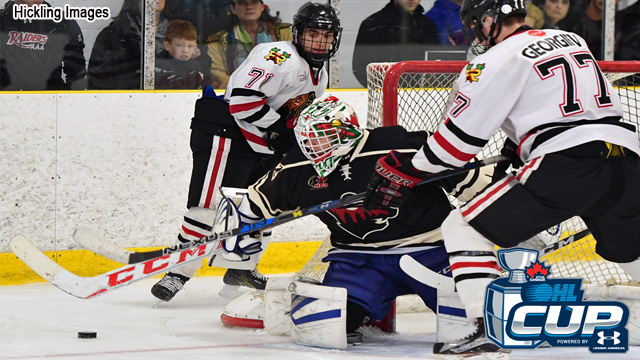 Riley Sutherland scored twice to lead the Mississauga Reps to a 5-3 win over the Eastern Ontario Wild on Friday afternoon. With the win, the Reps clinch first place in the Shanahan Division with a round-robin record of 3-0-1.

Sutherland broke a 3-3 tie with 2:57 remaining in the second period before Aaron Jamieson added a third period insurance goal to secure the 5-3 victory.

“I think in February we took a bit of a stumble in the GTHL Playoffs because we started playing like individuals rather than sticking to the team approach that brought us success this season,” said Reps coach Jack Dugas. “In the Wild Card Series to get here against the Senators we picked it up and started playing like we should have been and that has carried over into this tournament.”

Dennis Golovatchev and Zachery Wright also had Mississauga goals while Trevor Slaven made 13 saves in goal to record the win.

Eastern Ontario had markers from Joseph Carroll, Danyk Drouin and Kieran Craig as they finished with a record of 1-3-0 at the 2017 OHL Cup Powered by Under Armour. Carroll, Drouin, Jeremy Quesnel and Alexandre Hogue all had three points to lead the Wild in scoring.