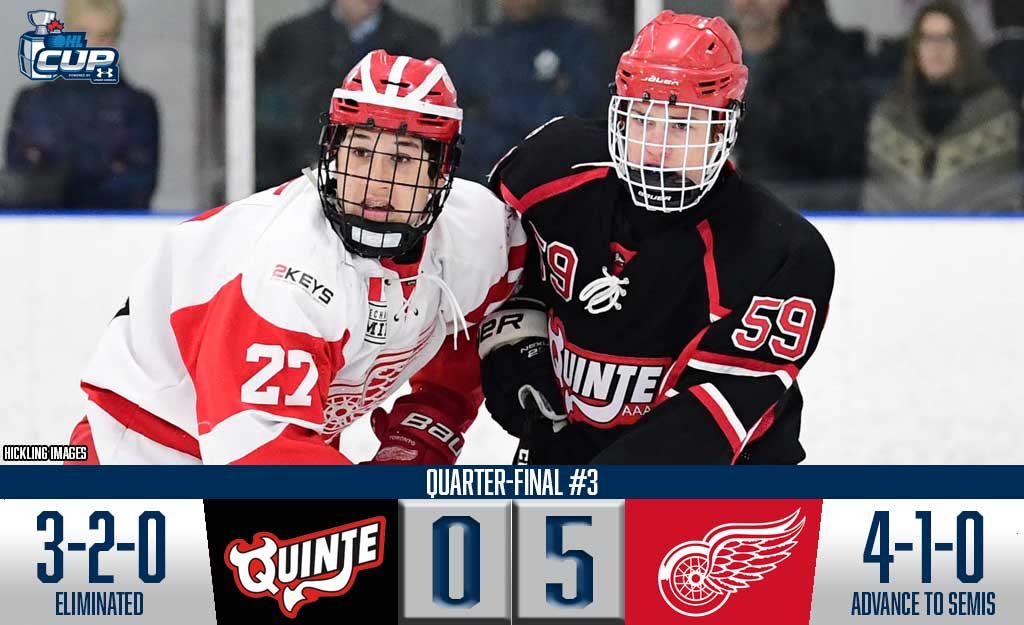 The Toronto Red Wings had their power play working, skating into the OHL Cup Powered by Under Armour semi-final with a 5-0 win over the Quinte Red Devils.

Luca Del Bel Belluz (5, 6) scored a pair of goals, leading all skaters with 12 shots on goal while going 18-for-24 in the faceoff circle to lead the Wings to their first semi-final appearance since 2006.

“Everybody played great,” said Del Bel Belluz. “We had defencemen score today and got a shutout from our goalie, it was a good game right down the lineup.”

Blueliner Andre Anania (1, 2) scored twice for Toronto while captain Francesco Pinelli (6) helped the Wings go 3-for-3 on the man advantage with a goal and an assist. Defenceman Owen Simpson pitched in with three assists.

“It’s big for our team, big for the Red Wings,” continued Del Bel Belluz of the accomplishment. “We’ve worked all season for this and it’s time for us to make the most of this chance we have.”

Quinte was unable to solve Josh Rosenzweig, who turned aside 13 shots for the shutout.

The OMHA’s fourth place Red Devils see their showcase come to an end as they fall to 3-2. They were led offensively by Luke LaPalm (4-4–8) who played on a line alongside leading goal-scorer Daniel Michaud (5-2–7).

The Red Wings prepare to face the Mississauga Rebels at 8:00pm, re-igniting their GTHL rivalry. The Red Wings eliminated the Rebels in the dying minutes of Game 7 in their second round GTHL Playoff series.