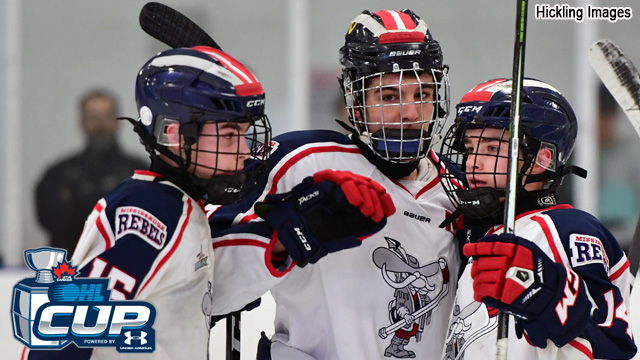 The Mississauga Rebels have picked up where they left off after being crowned GTHL Champions last week.

The dynamic duo of twins Dylan and Ty Jackson factored prominently into a 3-1 Rebels win over Elite Hockey Group on Thursday afternoon as they bring their record to 3-0 at the 2017 OHL Cup Powered by Under Armour.

Dylan Jackson scored twice and added an assist while brother Ty, who has won nearly 70 percent of his draws in the tournament,  picked up a helper and was a strong presence at the dot.

“My dad is pretty hard on him about the face-offs, so he practices a lot,” Dylan said of his brother with a laugh. “He’s great for us though and gets us possession a lot of the time which gives us a real edge.”

“They’ve been reliable all season,” he said. “Them, along with our goaltenders are consistent for us and give us a lot of confidence on forward. We want to keep doing the right things and stay away from bad habits so we aren’t going to be taking any games off.”

Though they played to a 2-2-0 record in the round-robin, EHG sees their OHL Cup Showcase come to an end as they failed to place above the Mississauga Rebels or Toronto Nationals in the Nash Division.

Elite Hockey Group wins two games at the OHL Cup Powered by Under Armour for the first time since 2013. They were led in scoring by Matthew Crasa who recorded six points (2-4–6) in four contests along with a team-leading plus-6 rating. Dalton Duhart led the team in goals with five.