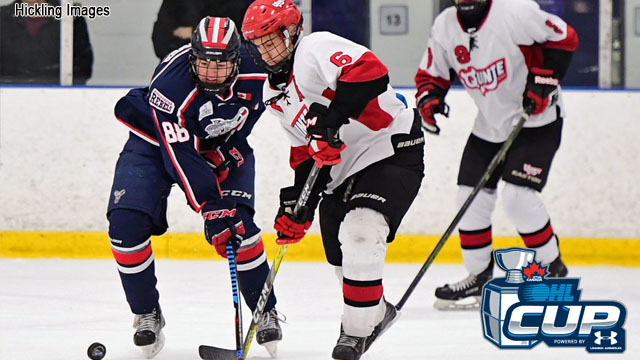 The GTHL Champions have arrived at the 2017 OHL Cup Powered by Under Armour.

Reid Russett netted a hat-trick while Mauro Biasutto and Arthur Kowara also scored as the Mississauga Rebels scored a 5-1 win over the Quinte Red Devils to open the showcase.

“They weren’t the nicest goals, but they count,” said Russett with a smile after the win. “Yeah, we’re hot right now, we’re playing really well and we want to keep that going all the way to the final.”

The Rebels recently took a seven game series victory over the Toronto Marlboros to be crowned GTHL Champions but despite the recent grind, they looked fresh against a physical Quinte team.

“We knew they’d come at us hard at the start, so we had to get through the first through minutes but we scored early and got ahead of them,” Russett added.

The Rebels, who last won an OHL Cup title in 2012, had a three-assist performance from defenceman Anthony Aguanno.

Quinte’s Jake Campbell provided the lone goal in the loss for the Red Devils.