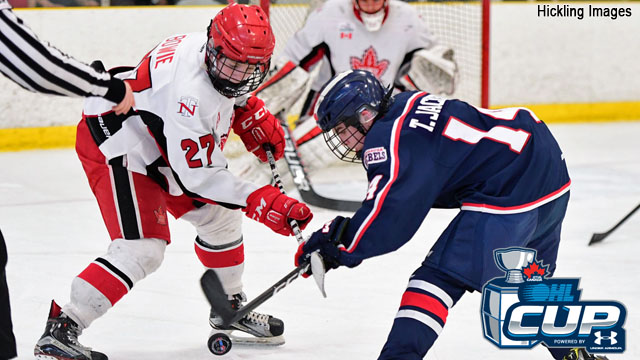 The way the game ended, you’d think the two teams had played each other a few times before.

The Mississauga Rebels and Toronto Young Nationals didn’t spare the rough stuff, dishing out hits and getting involved after the whistle in a tight-checking 2-1 game.

The GTHL Champion Rebels took the win as centreman Philip Tomasino provided both goals to earn Player of the Game honours.

“They beat us the first two times we played this season, so it’s a big win against them,” he said. “At this stage in the year every win is tough, nobody wants to lose and we have to leave it all out on the ice.”

Down a goal in the third, the Nats put on a big push, outshooting the Rebels 15-9 in the final 20 minutes.

“They brought the pressure late in the game but we did the right things, blocked some shots and picked up another win,” added Tomasino. “We’re playing great right now and it feels good to be 2-0 already.”

Reid Russett, who tallied a hat-trick in Tuesday’s 5-1 win over Quinte, picked up an assist in the win while goaltender Justin Lee made 24 saves.

Zach Roy was solid in the crease at the other end, earning Player of the Game honours for the Nationals with a 36-save performance.

Bradley Somers provided the lone goal for the Young Nats in the loss.