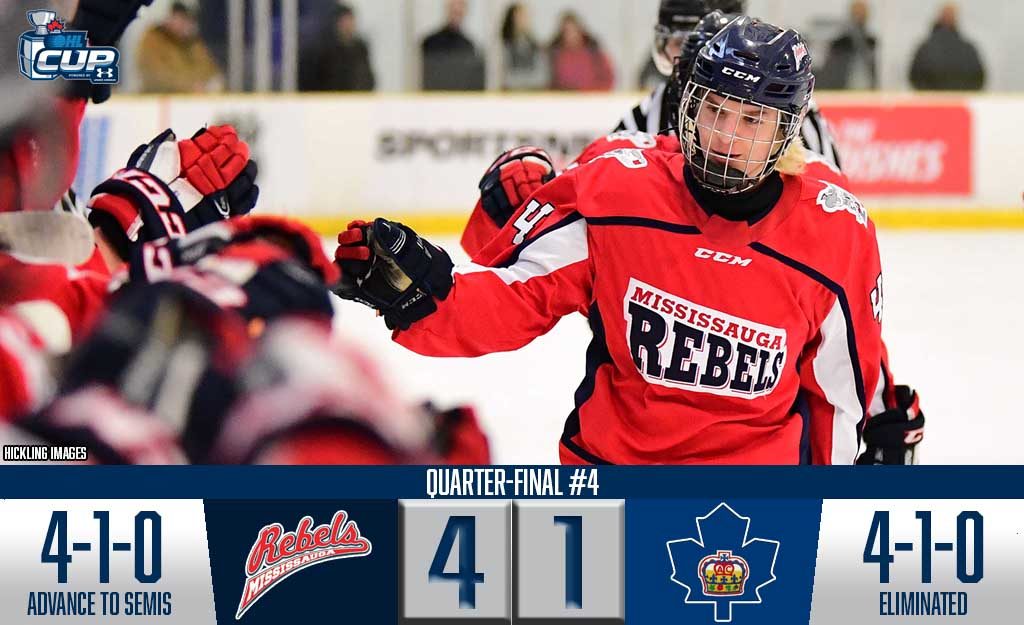 The wild card entry Mississauga Rebels got another strong performance from goaltender Justin Wu, advancing to the OHL Cup Powered by Under Armour semi-final with a 4-1 win over the province’s second ranked Toronto Marlboros.

Hard-working winger Max Donohoe (2, 3) scored twice while Jesse Fishman (5) tallied in a fifth straight game and Joshua Cini (1) netted his first of the showcase as the Rebels had all hands on deck.

“Exciting for sure,” said a smiling Donohoe post-game. “We’re definitely playing our best hockey at the right time. We’ve always believed in ourselves and we’re really seeing that it pays off to work together.”

Pasquale Zito picked up a pair of assists and Wu made 39 saves as the Rebels toppled the mighty Marlies despite being outshot 40-19.

“He’s been awesome all season,” Donohoe said of Wu. “He’s got a lot of talent. We needed him today and he really came through.”

The GTHL Finalist Marlboros are eliminated with their first loss, falling to 4-1-0. Johnston was joined offensively by linemate Jack Beck (3-7–10), fellow forward Marc Boudreau (5-4–9) and blueliner Logan Mailloux (1-8–9) at the top of the team’s scoring.

The Rebels prepare to face their GTHL rival the Toronto Red Wings in semi-final action at 8:00pm. The two clubs played to a seven game second round series that saw the Wings prevail in the dying minutes of Game 7.