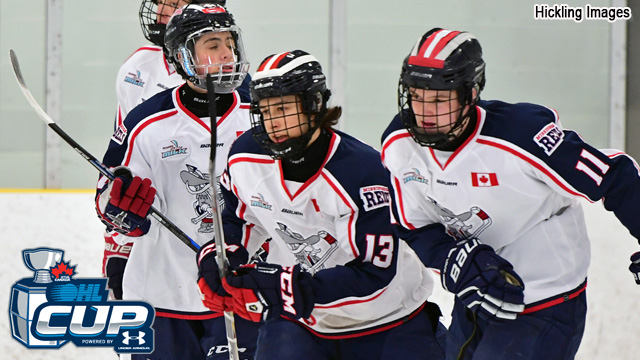 The Mississauga Rebels closed out a fine preliminary round with authority to finish Friday’s OHL Cup action, defeating the Cambridge Hawks 8-1.

Austin Brimmer and Ty Jackson both scored twice while blueliner Anthony Aguanno had a goal and an assist and goaltender Owen Robertson turned aside 31 of the 32 shots he faced.

“There’s a lot to like about our game right now,” said Brimmer, who earned Player of the Game honours with three points. “Everyone is going right now and we’re excited to get back out there tomorrow. Our goal has always been to win an OHL Cup and we are one step closer to getting there.

Philip Tomasino and Artur Kowara both pitched in with two assists as the Rebels rounded out the preliminary round outscoring opponents 18-4.

Defenceman Jagger O’Toole provided Cambridge’s lone goal in the loss as the Hawks wrap up the OHL Cup at 0-4-0. They were led in scoring by David Anderson who recorded three points (1-2–3) in four games.

The Rebels are currently led in scoring by defenceman Anthony Aguanno (2-4–6) whose plus-10 rating leads all players at the 2017 OHL Cup.