Rebels advance with 4-2 win over Whitby 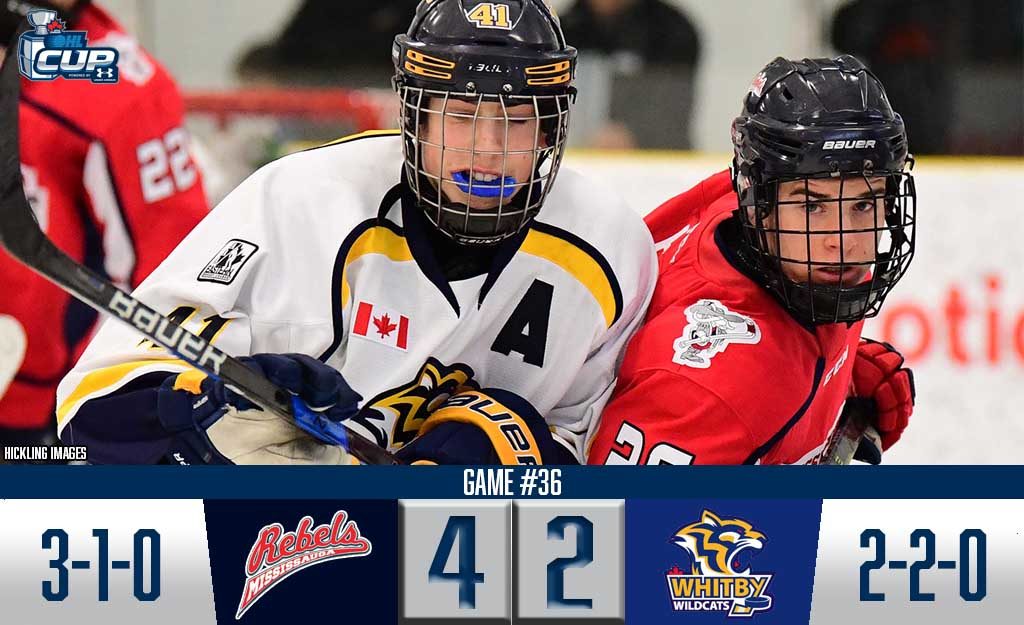 The wild card entry Mississauga Rebels have responded from a tournament-opening loss with three straight wins, defeating the Whitby Wildcats 4-2 to advance to the OHL Cup Powered by Under Armour quarter-final.

Mississauga struck twice in the opening half of the first period as Pasquale Zito (3) and Brady Cerkownyk (1) opened up a 2-0 lead. Jesse Fishman (4) connected with Tye Scott and Max Donohoe 3:43 into the second as the Rebels were in full control.

Whitby offered some push back as Brenden Sirizzotti (4) and Mikael-Simon Serroul (1) found the back of the net but a Judd Katz (1) insurance marker gave the Rebels the support they’d need to hang on for a 4-2 win.

“We really believe in these guys,” said Rebels head coach Lucky DeGrazia. “It’s a good group, they’ve got lots of character and there’s a ton of talent in that dressing room. We’re really looking forward to the next test.”

The Mississauga win is their second of the day after shutting out Team NOHA 2-0 in the morning.

“In both games today we played solid defence, got great goaltending and we’re really working together as a team,” DeGrazia continued. “We have enough to win any game we play in and we feel really good about our group.”

The OMHA champion Whitby Wildcats wrap up their showcase with a 2-2 record. Brenden Sirizzotti (4-3–7) led the team in scoring while Ryan Winterton (2-3–5) trailed him.

The Rebels advance to take on the Toronto Marlboros in quarter-final action on Saturday at 12:15pm.