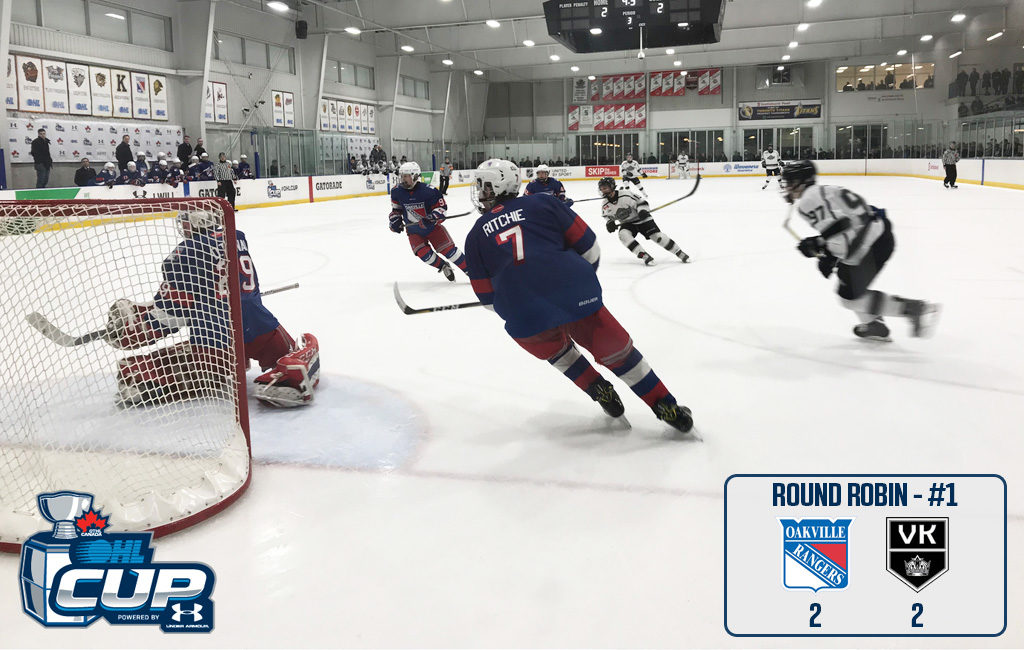 Even the best teams have a hard time coming back from an opening game loss at the OHL Cup. Fortunately for the Oakville Rangers, Adam Cherepacha (1) was on the doorstep with 55 seconds remaining in regulation to bang in a rebound and tie things up at two in a game that ended in a 2-2 draw.

Linemate Luke Evangelista took the puck to the net as Cherepacha crashed the net to put in a loose puck.

“That’s a huge goal for us, it was nice to salvage a point,” he said. “I thought we played a pretty good game, go some saves when we needed them and showed a lot of character coming back from being down 2-0.”

Five minutes of four-on-four overtime solved nothing as Oakville outshot Vaughan 4-0 in the extra frame.

Oakville netminder Davis Tolnai turned aside 40 shots while twin brother Cameron (1) accounted for Oakville’s other marker 6:13 into the third period.

“We really didn’t want to lose the opener,” Cherepacha added. “We weren’t satisfied with how things turned out at the OMHA Championships and we’ve come here to get the job done. Getting a point out of that game is very important for us.”

Vaughan carried the play for periods of the game, outshooting Oakville 42-32 as Ty Tullio (1) and Anthony Constantini (1) lit the lamp. Kings goaltender Marco Constantini turned aside 30 of the 31 shots that came his way.

The two clubs had seen each other twice before, with Oakville winning the first meeting before the two played to a tie in their latest encounter.