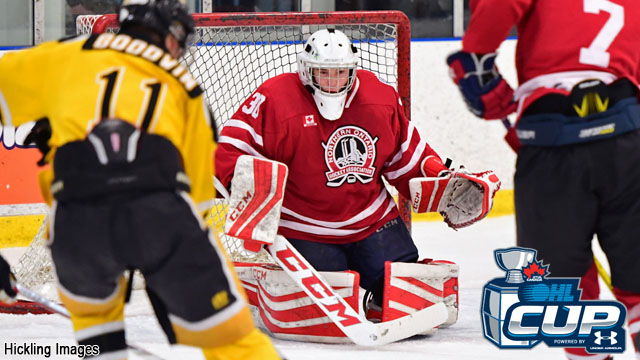 They’re still fairly unfamiliar with one another, but the NOHA’s best came away with a point in their OHL Cup opener as goaltender Joel Rainville made 28 saves in a 1-1 tie against the ALLIANCE Finalist Waterloo Wolves.

Waterloo’s Callan Christner and Team NOHA’s Cole Craft swapped goals before the game ended in a stalemate after 50 minutes of play.

“We only practiced together a couple of times, so it’s not like our team is used to playing together,” said Rainville after the final buzzer. “A lot of us have grown up together so it’s been a cool experience to learn how to work together and getting the point was rewarding.”

Waterloo outshot Team NOHA 29-14 as both teams come away with one point in the standings.

“We’ll take it,” added Rainville. “I thought we played against a pretty good team this morning and did some good things out there.”