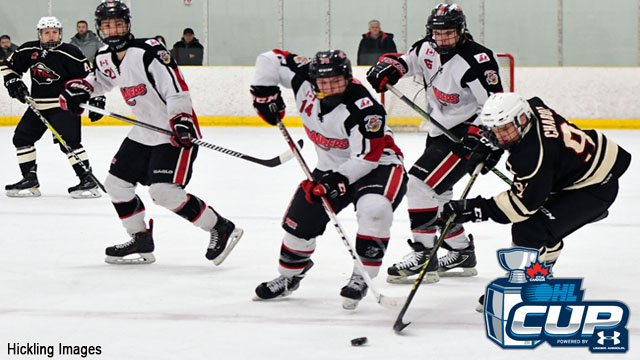 Up 2-1 in the third period, the Raiders lost forward Cullen McLean on a scary looking play that saw the young player carted off on a stretcher as paramedics tended to his injured leg.

Ajax-Pickering would hold on to defeat the Eastern Ontario Wild by a score of 2-1, a win that was dedicated to a fallen teammate.

“The boys pulled together and got that win for Cullen,” said Ajax-Pickering captain Connor McMichael. “He’s a great teammate and we’re all thinking of him.”

McMichael and Ryan Nash scored Raiders goals while Cole Brady turned in a stellar performance in the crease. The win comes on the heels of a 3-2 loss to the Toronto Marlboros on Tuesday night.

“We’re proud to wear the Raiders logo and it’s special to be a part of an event like this,” McMichael continued. “We have a big game against the Reps tomorrow that we’ll need to be prepared for.”

Joseph Carroll provided the lone goal for the Wild, one that came on the power play 1:24 into the first period.