Raiders go out on top with 3-2 victory 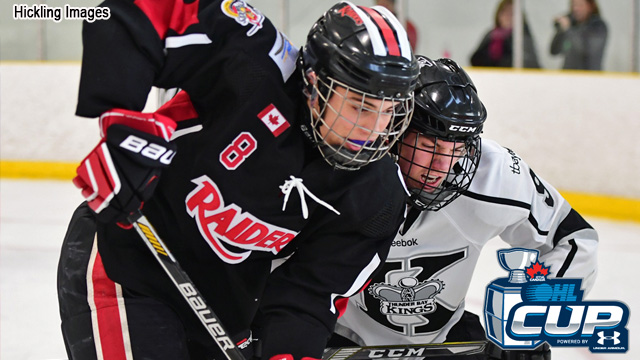 The Ajax-Pickering Raiders will be able to say they won their last game together.

Making their first ever appearance at the OHL Cup Showcase, the Raiders played to a 2-1-1 mark, narrowly missing the cut for quarterfinal contention in a very competitive Shanahan Division after defeating the Thunder Bay Kings 3-2 on Friday afternoon.

Ian Martin scored twice while linemate Jacob Winterton also found the back of the net in a chippy, penalty-filled affair.

“It’s nice to win our last game before we go our separate ways,” said Martin after the final buzzer. “I’ve had great linemates in Connor McMichael and Jacob Winterton who are both good guys and we formed a lot of chemistry together. It’s pretty cool to be a part of the first Raiders team to come to the OHL Cup.”

The Kings made a late push, scoring twice in the final five minutes with goals from Owen Belisle and Jonathon Kilby, but it’d be too little, too late as Thunder Bay ends its OHL Cup schedule with an 0-4-0 record.

Martin led the Raiders in scoring with five points (3-2–5) while Jacob Winterton was a close second with four (1-3–4). Goaltenders Cole Brady and Damon Beaver combined to record a .918 save percentage over the four games.