Raiders and Reps fight to 2-2 tie 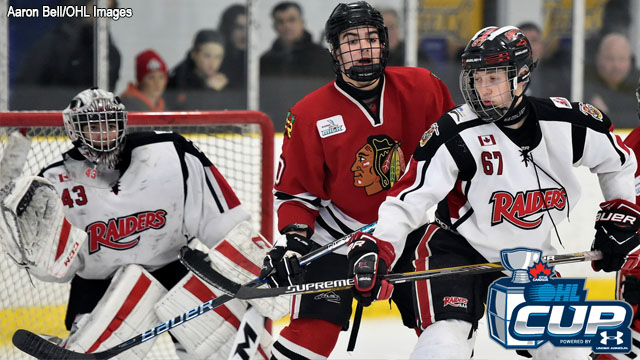 The Ajax-Pickering Raiders and Mississauga Reps couldn’t resolve a 2-2 draw in a high-paced back-and-forth affair.

The Raiders survived a too many men penalty in overtime while Reps goaltender Ryan Dugas stopped Ajax-Pickering star Connor McMichael on a breakaway inside the final 10 seconds of the extra frame.

“I was just trying to take away as much net as I could and was able to get a piece of it,” said Dugas as he recalled the encounter. “We’d rather have two points but we’ll take one considering we made a few mistakes in that game that we managed to survive.”

Mike Petizian recorded his OHL Cup-leading sixth point of the showcase with a goal for the Reps while Riley Sutherland scored the game-tying goal with 3:03 left in the second period.

The Reps close out Thursday leading the Shanahan Division with five points while the Raiders are one point behind the second place Toronto Marlboros with three.

3:28
2022 OHL Cup Powered by Under Armour
Sights & Sounds from the OHL Cup Championship Final
6 months ago

2022 OHL Cup Powered by Under Armour Mississauga Senators
GALLERY: Senators come out on top in 2022 OHL Cup Final
6 months ago