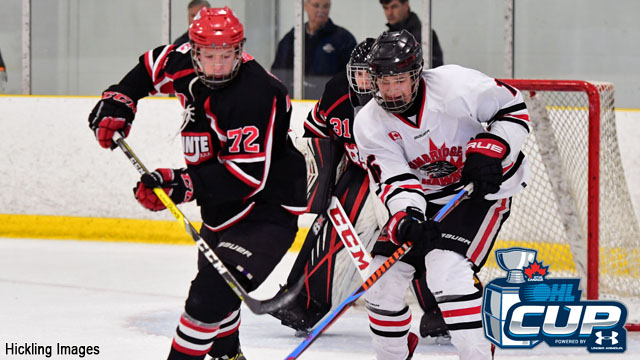 The Red Devils opened the showcase on a sour note, dropping a 5-1 decision to the Mississauga Rebels on Tuesday but had plenty of jump against Cambridge as they went 3-for-7 on the man advantage.

Power winger Emmet Pierce recorded three assists while Jake Campbell and Graham Dickerson had a goal and an assist.

“We worked it around pretty well on the power play and took advantage of the chances we were given,” said the big 6-foot-5 Pierce. “It’s good to get a win and hopefully it can help us moving forward.”

Zachary Uens and Matthew Cawker also scored for the Red Devils while blueliner Cameron Supryka registered a pair of assists.

Quinte has made things interesting in two straight OHL Cup Showcases, reaching the quarter-finals last year before losing out to the Toronto Jr. Canadiens. This year’s Red Devils team was provided with some pre-tournament inspiration from some former graduates.

“We watched a couple of videos from Brady Gilmour (Saginaw Spirit) and Andrew Shaw before our game last night and they wished us good luck here. It was pretty cool to see a couple of really good players from the area taking notice.”

John McDonald scored the lone goal for Cambridge as the Hawks fall to 0-2 in the showcase.