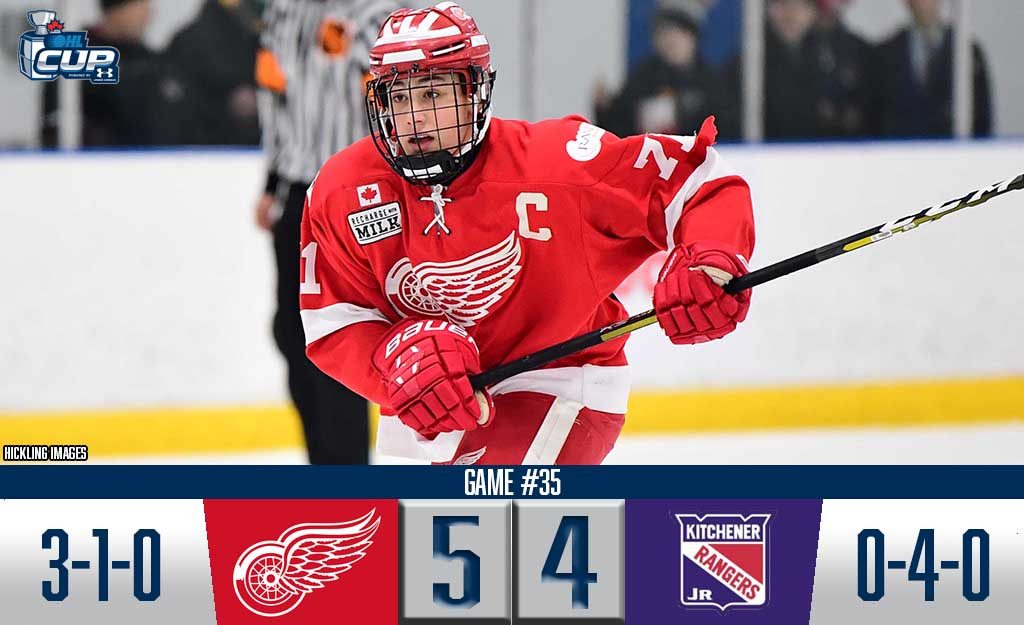 Francesco Pinelli (3, 4, 5) finished off an overtime two-on-one to send the Toronto Red Wings to the OHL Cup Powered by Under Armour quarter-final, defeating the Kitchener Jr. Rangers 5-4.

The Red Wings clawed back from a 4-2 deficit, scoring twice in the third period before Luca Del Bel Belluz fed Pinelli a perfect pass off the rush with eight seconds to go in overtime.

“Their team worked really hard,” Pinelli said, complimenting Kitchener’s effort. “We matched them though, tried to focus on getting pucks in deep and doing the work down low. Fortunately we cashed in on some of those third period chances to tie the game and then in overtime things worked out.”

Pinelli scored twice in the first period but Kitchener charged out in the second to score three times and lead 4-2 after 30 minutes of play. Nicholas Athanasakos (1) and Justin Ertel (2) found the back of the net in the third period to send things to overtime.

The Red Wings outshot Kitchener 51-25 as Jr. Rangers netminder Dawson Rowe made 46 saves to keep his team in the game.

Kitchener heads home with an 0-4 record following a pair of Friday losses. Braeden Bowman (3-2–5) led the team in scoring while Matt Sop (2-2–4) trailed close behind.

The Red Wings advance to face the Quinte Red Devils in quarter-final play on Saturday at 11:45am.