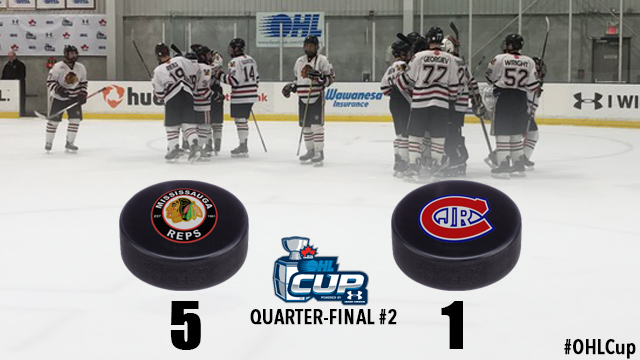 The Wild Card entry Mississauga Reps are headed to the OHL Cup Semi-Finals after Mike Petizian scored three times in a 5-1 win over the Toronto Jr. Canadiens.

Though they needed a Wild Card Play-In win to gain entry to the showcase, the Reps finished second in the GTHL this season and are showing exactly why with their play this week, improving to 4-0-1 as talented forward Jamieson Rees pitched in with a goal and two assists.

“It’s been a great week,” said Petizian with a smile after the win. “We’ve really stepped up here and proven ourselves and I think everyone in our dressing room deserves some credit for that. The wins haven’t come easy, but we are finding a way.”

The Petizian, Rees and Jamieson line was front and centre again, accounting for four of Mississauga’s five goals while Cole Burtch added the other.

“This is the tournament you grow up dreaming of having a chance to play in,” Petizian added. “This hat-trick is one I won’t forget any time soon.”

Mississauga goaltender Ryan Dugas turned in another solid performance, improving to 3-0-0 since Tuesday with a 23-save effort.

Blueliner Evan Tanos scored the lone goal for the Jr. Canadiens who see their showcase come to an end, playing to a 2-2-1 mark. They were led in scoring by Brendan Hoffman who had a goal and three assists in five contests.

The Reps will take on the London Jr. Knights in Saturday night’s Semi-Final action at 6:00pm.

VIDEO: Mike Petizian scores his first of three goals for the Mississauga Reps.