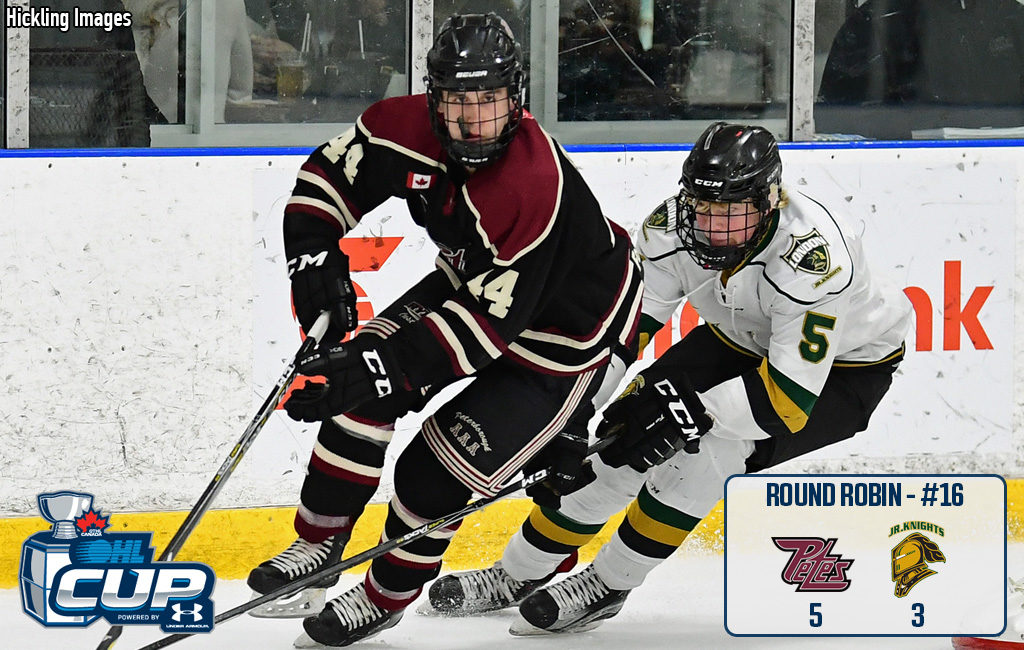 The London Jr. Knights looked as though they were well on their way to victory, leading 3-1 inside the final minute of the second period. The Peterborough Petes had other plans though as Noah Sedore (1, 2) buried a late-period dagger to move within one before the Petes proceeded to add three in the third for a 5-3 win.

Peterborough’s big line of Sedore alongside Luc Reeve (1, 2) and Nolan Burke combined for four of the five goals before Ben Lukinuk (1) hit the empty net as the Petes improved to 2-0 at the 2018 OHL Cup Powered by Under Armour.

“We’re used to playing together and tonight we really hit it off,” said Reeve whose second of the night was the game winner with 2:07 left in the third period. “It’s pretty special to come here and have this kind of start, but we’re not getting too far ahead of ourselves.

“We can only take this one game at a time.”

Sedore and Reeve both finished with two goals and an assist while Burke picked up three assists in the win for the Wild Card entry Petes.

After Will Cranley backstopped Peterborough to a pair of wins, William Craig took over in the crease to turn aside 23 of the 26 shots that came his way, surrendering London goals by Jordan Daer (1), Alexander Botetzayas (1) and Johnny Fitzgerald (1).

The Petes (2-0-0) pull into first place in the Lindros Division and see their next action against Vaughan on Thursday at 12:30pm. The Jr. Knights (0-2-0) are still in search of their first win and look to get on track Friday against Vaughan at 8:30am.

Noah Sedore scores from a pretty pass by Logan Maunder.