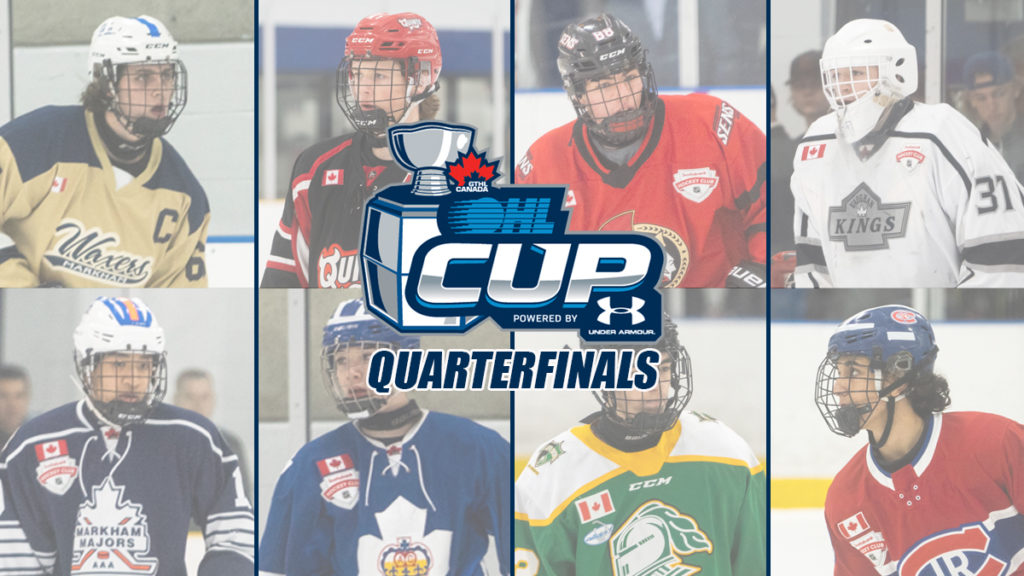 Playoffs get underway at the 2022 OHL Cup powered by Under Armour on Saturday morning as the list of contenders has been narrowed from 20 down to eight to begin the day.

Here’s a look at who’s playing:

A battle of cross-town rivals promises to be a good one, with the wild card entry Waxers getting a shot against the GTHL finalist Majors who enter action undefeated, surrendering a tournament-low four goals against.

Waxers forward Nathan Aspinall currently sits second in tournament scoring with nine points (3-6–9). The Waxers are also 5-for-10 on the power play thus far. They earned their quarterfinal shot via overtime heroics from underage talent Owen Griffin on Friday, defeating the Brantford 99ers 2-1.

It’s a battle of two teams that haven’t gone this deep in quite some time, with the Waxers making their first playoff appearance since 2006 and the Majors back in the great eight for the first time since 2011.

The Red Devils navigated the entire regular season undefeated with a record of 23-0-3. They reached the quarterfinals on an overtime winner from Ethan Toms to defeat the Waterloo Wolves on Friday.

The Marlboros have scored at least four goals in all four of their victories, spreading the offence around with six players currently producing at least five points.

The Marlies and Red Devils met in the 2015 OHL Cup Quarterfinals, with present-day Edmonton Oilers forward Ryan McLeod winning it for Toronto in OT enroute to their most recent championship title.

Two teams that clinched Quarterfinal berths on Friday go head-to-head as the wild card entry Mississauga Senators and their high-powered offence meet the London Jr. Knights, who were a force in the ALLIANCE throughout the season.

The Sens lead all teams with 25 goals in the showcase led by underage forward William Moore who has six. Mississauga is out to take care of some unfinished business after a disappointing showing in the GTHL Playoffs that found them outside of the League’s final four. The Senators were a mainstay in the top-two of the weekly OHL Cup Top 10 Rankings throughout the season before ending up third in the final edition.

The London Jr. Knights have attracted scouts throughout the showcase with the presence of underage standouts Ryan Roobroeck and Ethan Weir. Big producer Jett Luchanko turned heads with a hat trick and two assists in Friday morning’s 8-0 drubbing of the OMHA champion York-Simcoe Express.

The Jr. Knights reach the Quarterfinal for the first time since 2017 when a team that included current AHL players Ryan Suzuki and Mason Millman reached the semis before falling to the eventual champion Mississauga Reps.

Familiar opponents the Vaughan Kings and Toronto Jr. Canadiens meet in a Quarterfinal matchup, their first OHL Cup encounter since JRC claimed championship supremacy at the Mattamy Athletic Centre in 2018.

The Jr. Canadiens and Kings played each other once during the GTHL regular season, battling to a 3-3 tie on December 4th. JRC got the better of Vaughan in GTHL playoff action on March 22nd, taking a 7-3 victory enroute to their championship triumph over the Markham Majors.

Jr. Canadiens teammates Porter Martone (5-5–10) and Michael Hage (4-6–10) sit tied for the tournament lead in points as JRC has taken a couple lopsided wins on their path to the playoffs. JRC was without key blueliner Henry Mews for Friday’s win over TPH Hockey.

The Vaughan Kings gained entry via wild card victory over the Halton Hurricanes on Tuesday. Sam O’Reilly (5-1–6) has led the way offensively during the showcase, recording the event’s first four-goal game since 2013 on Friday morning in a 6-1 win over the Northern Ontario Hockey Association. Logan Sawyer (2-4–6) has also come through in the clutch for Vaughan, continuing to be a regular on the scoresheet.