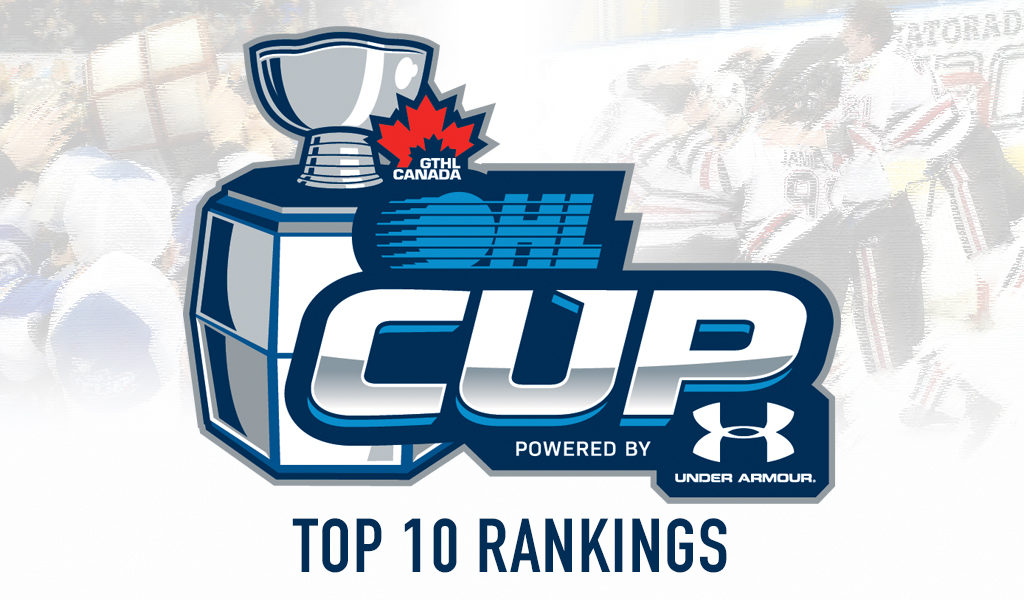 Mississauga Reps and Vaughan Kings next to officially qualify

Toronto, ON – The Ontario Hockey League today announced the twelfth edition of the weekly minor midget rankings for the 2018 OHL Cup Showcase Tournament powered by Under Armour and hosted by the Greater Toronto Hockey League.

The 2018 OHL Cup powered by Under Armour and hosted by the GTHL is scheduled for March 13-19 and will feature 20 teams from across Ontario and the United States showcasing many of the top players eligible for the 2018 OHL Priority Selection.  All games will be played at Scotiabank Pond in Toronto until the Championship Final moves to the Mattamy Athletic Centre on Monday March 19 where it will be broadcasted nationally on Sportsnet.

Two more teams have clinched spots at the 2018 OHL Cup Powered by Under Armour as the Mississauga Reps and Vaughan Kings advanced to the final four of the GTHL’s playoffs. The Reps rise one spot this week, taking a 4-0 series lead in points over the fifth-ranked Toronto Jr. Canadiens in their second round series. The OMHA’s Barrie Colts return to the Top-10 in the ninth spot, holding a 4-0 series lead in points on the North Central Predators in their first round playoff series.

16 of the 20 spots in the 2018 OHL Cup powered by Under Armour are guaranteed through league competition.  The 16 guaranteed spots continue to include all four GTHL Semi-Finalists, and the top four teams that place at the OMHA Championship.  Three teams from the ALLIANCE will still be guaranteed a spot in the tournament including the Champion and Finalist, along with the winner of a best-of-three Semi-Final Wild Card Series to be played between the losers of the two league Semi-Finals.  Also as in past years, two tournament entries are reserved for United States competition, while both an HNO and NOHA representative will also compete.  For the second straight season the final guaranteed spot will be awarded to HEO but represented by their previous year Bantam Championship team who will be reassembled for tournament competition.  This season, HEO’s entry will be members of the 2017 Bantam Champion Ottawa Jr. 67’s.

The final four entries at the 2018 OHL Cup powered by Under Armour will be Wild Cards determined among eight teams that will play a one game ‘win and in’ scenario.  The eight competing teams aiming for the final four tournament spots will continue to include the fifth place team at the OMHA Championship, and the loser of the ALLIANCE Semi-Final Wild Card Series.  As introduced in 2016, two spots in Wild Card games will be reserved for GTHL teams.  The two competing GTHL teams will be determined through a pair of Wild Card Play-In Series matchups involving the four GTHL teams who qualified for the playoffs but lost in the first round.  As introduced in 2017, one spot in a Wild Card will also be reserved for the winner of an OMHA SCTA Consolation Game that features both teams who lost in the SCTA Tournament Semi-Final.  The OMHA teams eligible for this matchup will be determined annually based on the league not hosting the OMHA Championship.  Finally, the three remaining teams who will compete in the Wild Card matchups will be named by the Tournament Selection Committee.  The Committee will evaluate and review a team’s post-season success as the first criteria for selection, with additional criteria to include regular season play and tournament play.  All four Wild Card games will take place on Tuesday March 13 with specific matchups and times of play to be determined by random draw among the eight competing teams on Tuesday March 6.