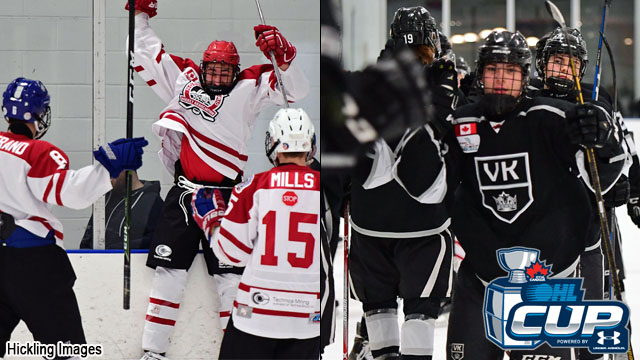 Mathieu Parent’s goal with under five minutes remaining would knot the score at four and that’s where it would stay as Team NOHA managed to come back and tie the Vaughan Kings in a 4-4 draw.

Team NOHA climbed ahead 2-0 on first period goals from Tristan Cicchello and Cole Craft before the Kings charged back with three goals in under three minutes as the score read 3-2 Vaughan after one.

Parent’s goal gave Team NOHA its second tie of the day after a 1-1 stalemate with the Waterloo Wolves earlier on Wednesday.

“I think we fought hard for the tie, but we could have had two points there if we didn’t take our foot off the gas a little bit,” said Craft post-game. “I think there were a lot of positives though. We played with a lot more chemistry than we did this morning so I think we are improving every game.”

Matthew Gauthier, Drew Ferris and Matthew Guglietti also found the back of the net for the Kings who hold a 1-0-2 record through three games and are now off until Friday when they face Waterloo.

Team NOHA looks for its first win on Thursday morning against the OMHA Champion Whitby Wildcats.