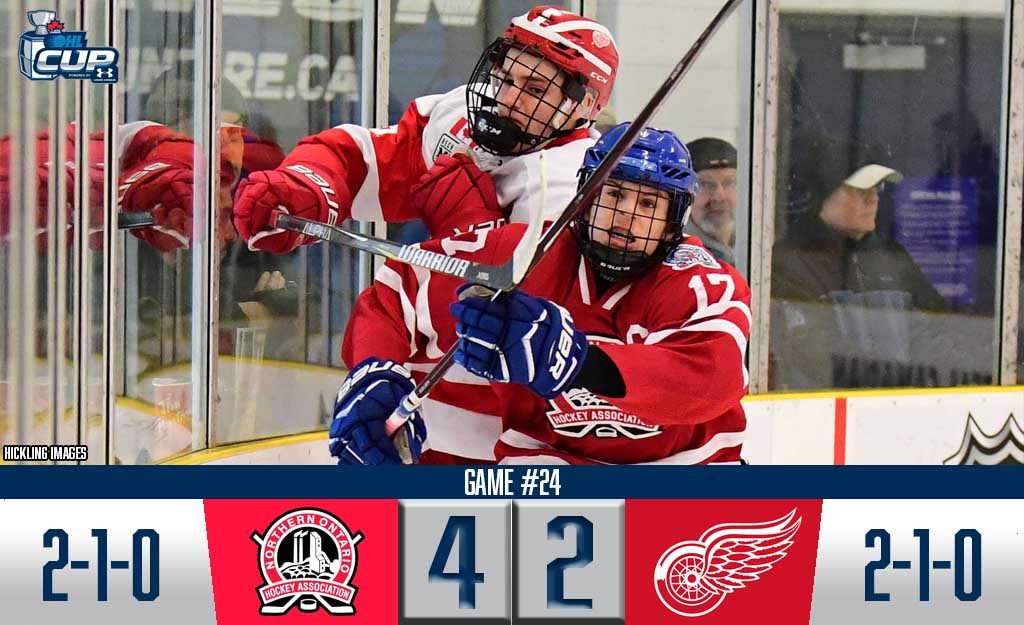 Team NOHA fell behind 2-0 early but a quick response on goals from Jack Matier (1) and Devon Savignac (2) one minute apart knotted things at two, setting the stage for a big second period and a 4-2 victory.

Ethan Marois (1) and Josh Kavanagh (2) scored in the latter half of the second while big netminder Benjamin Gaudreau provided some timely saves as Team NOHA made things interesting in a tight Lindros Division, defeating the undefeated Toronto Red Wings to improve to 2-1.

“Full marks to our guys today, they really responded after what we all agreed was a bit of a setback against Whitby,” said head coach Kyle Brick, who also serves as bench boss for the NOJHL’s Blind River Beavers. “Considering this group only practiced three times before our first game, the effort we saw today was pretty impressive against a solid GTHL team.”

One of several members of the province’s fourth-ranked Sudbury Minor Midget Wolves on the roster, Savignac earned Player of the Game honours for Team NOHA with a goal and an assist.

Luca Del Bel Belluz (3) and Adam Fantilli (2) scored early first period goals for the Red Wings before they were silenced offensively the rest of the way.

Team NOHA is back in action bright and early on Friday, taking on the Mississauga Rebels at 8:00am. The Red Wings look to bounce back on Friday afternoon against the Kitchener Jr. Rangers at 1:15pm.