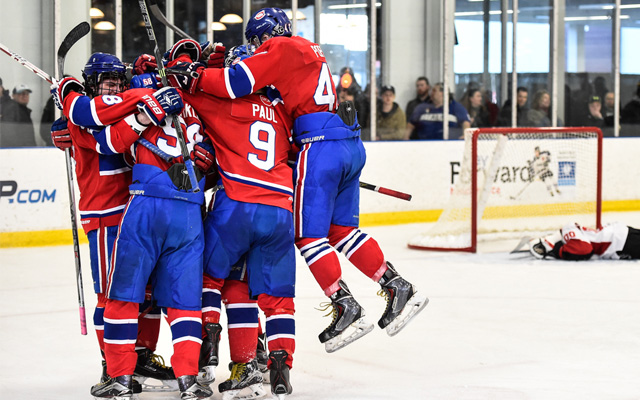 Ryan Boon wheeled around the Quinte goal to feed a waiting Kirill Nizhnikov on the doorstep 1:35 into overtime as the Toronto Jr. Canadiens return to the OHL Cup Semi-Finals with a narrow 3-2 win over the Quinte Red Devils.

Nizhnikov’s second of the game and third of the showcase came in a second straight year of wild OHL Cup Quarter-Final action that featured three of the four games spilling over into overtime.

“I had some speed going when I entered the zone and just decided to take it around the net to see if I could find an opening,” said Jr. Canadiens blueliner Ryan Boon who architected the winning goal. “Nizh was sitting back door and I found him for the goal.”

Boon complimented the valiant effort put forth by the Red Devils squad who entered the showcase by way of a Wild Card Play-In victory.

“They really work,” he said. “You wouldn’t think they’re a Wild Card. The game could have easily gone the other way but we made the most of our chance.”

The Quinte Red Devils finish their 2016 OHL Cup with a record of 3-1-1, scoring a win over the Vaughan Kings on Tuesday before stringing together wins over the Toronto Marlboros, Team NOHA and Southern Tier while playing to a 4-4 tie against TPH Hockey. Dawson Baker led Quinte in scoring with seven points (5-2–7) in five games.

The Jr. Canadiens advance to take on the Toronto Marlboros in a rematch of their recent GTHL Semi-Final series that saw the Marlies advance with an 8-4 victory in points.