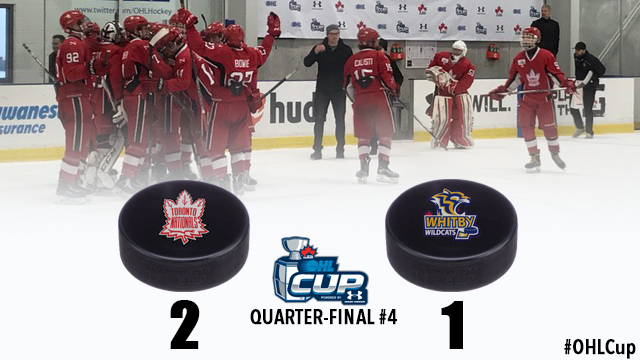 The Whitby Wildcats threw everything they could at Zach Roy, but the Toronto Nationals would survive under siege late in the third period to reach the final buzzer and take a 2-1 Quarter-Final victory.

Roy made 25 saves while Brandon Coe and Brendan Bowie had goals, leading the Wild Card entry Nationals into the OHL Cup Semi-Finals where they’ll face the Vaughan Kings.

Blake Murray brought the Wildcats within a goal with 6:34 remaining, but Whitby was unable to solve Roy in the late stages.

“Zach is back,” said Nats head coach Jim Vitale. “He went through a rough patch while coming back from injury this season, but he’s seeing the puck well and has been a big reason why we’re going to the semis.”

The Nats, who were an OHL Cup Selection committee choice for a Wild Card Play-In game, have thrived in their role as underdog at the OHL Cup.

“The guys have been loose all week and we’re not feeling any pressure,” Vitale added. “We’re privileged to be here at the OHL Cup and our mentality has been to make the most of our opportunity all along. We’ve overcome injuries to some of our key players and we’re excited about the chance to play tonight.”

The OMHA Champion Whitby Wildcats end their OHL Cup Showcase with a 2-1-2 record. They were led in scoring by underage forward Cole Perfetti who recorded eight points (3-5–8) in five games. The Wildcats reached the OHL Cup Quarter-Finals for the first time since 2014.