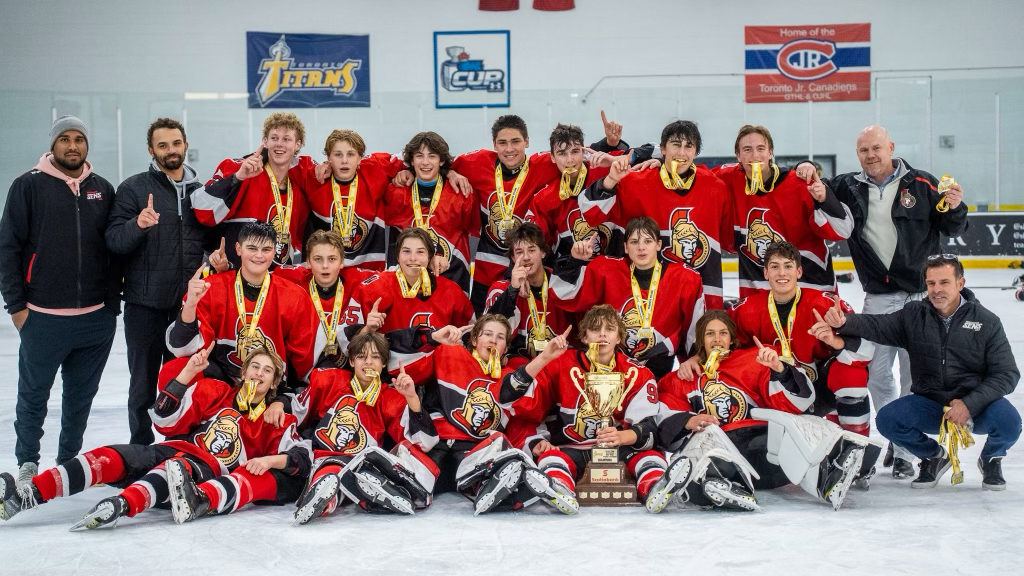 Another wave of young prospects has begun to immerse themselves in what is arguably the biggest season of their young careers.  2007-born players made their long-awaited debuts in the U16 division this past weekend as the first tournament of the 2022-23 season took off with the Toronto Titans hosting the first major event of the season.

Fresh off an OHL Cup title for the organization back in April, it was the Mississauga Senators who found themselves as the last team standing on Monday night at Scotiabank Pond, taking home the Titans Tournament championship.

On the final day, the Sens clawed their way to the final, with competitive matchups in the quarter-final against the Vaughan Kings, and later in the semi-final against the Toronto Nationals. The Sens came out on top with shootout victories in both contests.

In both shootouts it was the heroics of the Sens trio of Matthew Manza, Caden Taylor, and Jack Ivankovic between the pipes. Manza and Taylor converted on both of their shootout attempts while Ivankovic shut the door against the Kings and Nats respectively.

Taylor, who spent last season with the Toronto Jr. Canadiens 06’s, led the team in points with five goals and two assists in his first event back against his own age group.

“Last year, we had an amazing group of guys, the atmosphere in the room was unreal and it was an amazing experience,” said the former 06 JRC member.

“I see that same positivity in the team we have this year,” he added. “All the guys are already connecting like brothers. I think this tournament win really brought us together even more as we had some really close games, making this win even more special.”

In combination with what was a great team effort, it was the performance of goaltender Jack Ivankovic that stole the show this weekend for the Sens.

“We couldn’t have asked for a better way to start the season,” said Ivankovic. “It was a great start with a great group of guys.”

The son of former OHL netminder Frank Ivankovic (1993-96), the Sens netminder stood on his head the entire weekend, posting a 5-0 record with a 1.41 GAA, and to top it all off, a shutout against the Marlboros to secure the championship.

“We have spent a lot of time working on our D-Zone structure,” he continued. “Both our forwards and D have been working hard to learn these systems and it has clearly paid off.”

The U16 season continues as leagues across the province begin their respective regular seasons. Another major tournament is on the horizon as the annual Wendy Dufton Memorial takes place later on this week at the Western Fair in London.

Although the Sens will not be in London this weekend, Ivankovic and the group are excited to continue to build on the victory as they get set for their regular season opener.

“The tournament has definitely shown us that we have what it takes to win, now we just have to build on it.”