Mississauga Senators are 2022 OHL Cup Powered by Under Armour Champions 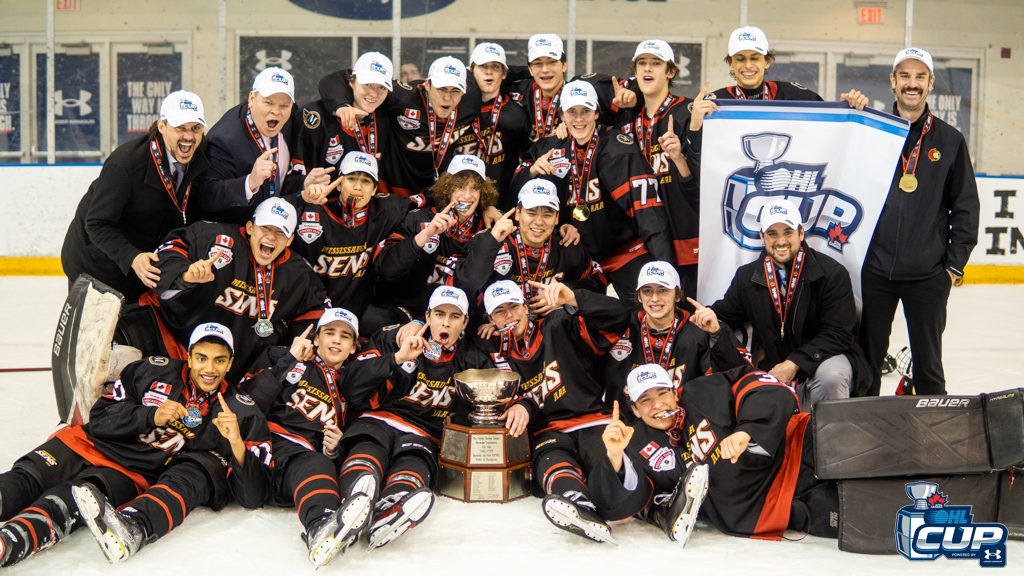 Toronto, Ont. – Michael Misa had a record night, powering the wild card entry Mississauga Senators to a 6-2 win in the 2022 OHL Cup powered by Under Armour Championship Final at the Mattamy Athletic Centre.

“This is the biggest tournament of minor hockey and I’ll remember this game forever,” said Misa, soaking in the win post-game. “It’s been a great ride with the boys and I couldn’t have dreamed of a better ending.”

Senators head coach Chris Stevenson has coached the group since their minor atom days, and was emotional after the final horn.

“We took the long road. Obviously we didn’t have the GTHL Playoffs that we hoped for but we learned from it, got to that wild card game and got better every game.

“I couldn’t be prouder of these guys. I’ve seen them grow and tonight means so much.”

The first Senators championship in OHL Cup history started fast as Bode Stewart and Malcolm Spence scored a pair of goals in the opening five minutes, but the Jr. Canadiens would respond as Porter Martone scored his seventh of the showcase at 7:38.

Misa’s first of the night came with 3:49 remaining in the opening frame as he took a Justin Hyunh feed on the doorstep and put it past Jr. Canadiens netminder Paolo Frasca to send the Sens to the dressing room up 3-1.

The Jr. Canadiens suffered a blow early in the second period when Martone was ejected from the game, but got a shot in the arm on a power play blast from Anthony Cristoforo who brought them within two.

Michael Misa’s fifth point of the night gives him 20 in the Showcase, surpassing Connor McDavid for the most in one tournament. pic.twitter.com/4I7eC0vrWN

Misa’s second of the night came unassisted at 10:39 of the second as the Senators wrestled back the momentum for good. He’d complete the hat trick 1:08 into the third for his 10th goal of the showcase, besting Shane Wright’s 2019 mark of 18 points on the tournament.

Misa surpassed McDavid on Bode Stewart’s second goal of the night with 1:24 left on the clock, sealing the deal as Mississauga led 6-2.

The Senators outshot the Jr. Canadiens 26-21, going 3-for-6 on the power play as goaltender Evan Maillet made 19 saves.

The loss marks the Jr. Canadiens’ first of the tournament as they finish with a record of 6-1. Michael Hage led JRC with 16 points (7-9–16) trailed closely by Martone who produced 15 (7-8–15). Anthony Cristoforo (2-7–9) led all defencemen with nine points in the tournament.

The Mississauga Senators reign supreme in 2022, defeating the Ajax-Pickering Raiders 8-2 in wild card action before playing to a 6-1 record, outscoring opponents 40-18. Misa led the way on the scoresheet with his new showcase record of 20 points (10-10–20). The Senators join the 2017 Mississauga Reps and 2010 Mississauga Rebels as the third wild card entry to hoist the OHL Cup.

The OHL Cup was presented to Senators goaltenders Evan Maillet and Kabo Leung by GTHL President Don West and OHL Commissioner David Branch. The game was broadcast live on CHL TV and across the province on the OHL Action Pak.